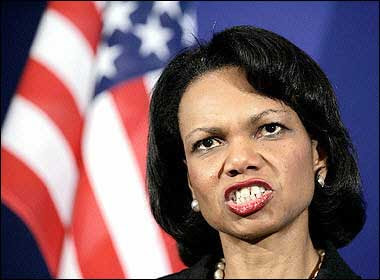 (AFP, 01-30-06)
2006 really was Condi's banner year. She did the most while accomplishing the least. By this time, Team Condi had everything down to a science. And while you may argue that Condi's tenure at the State Department constituted more than simply a series of vapid photo-ops, you have to admit that her tenure included an astounding number of them, most of which were faithfully dissected by yours truly. As Condi's routine gelled and settled, so too did this blog's fascination with the minutiae of her fairytale world increase. The highlights from year two: 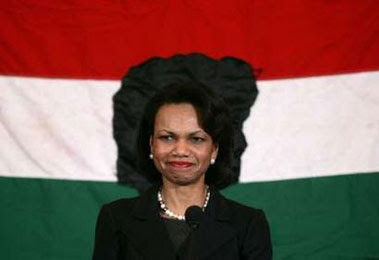 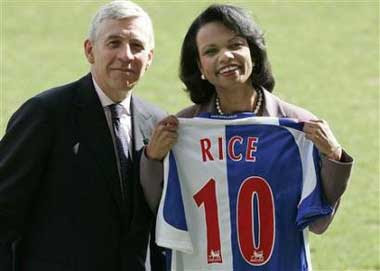 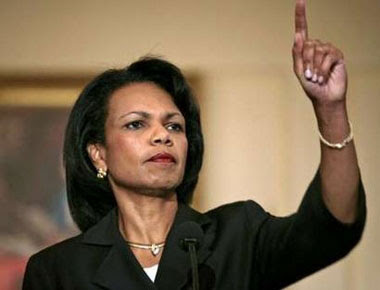 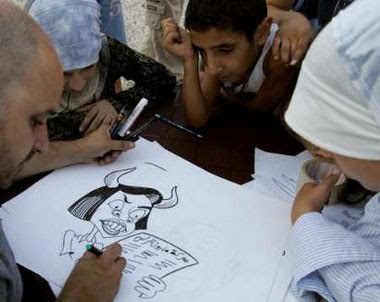 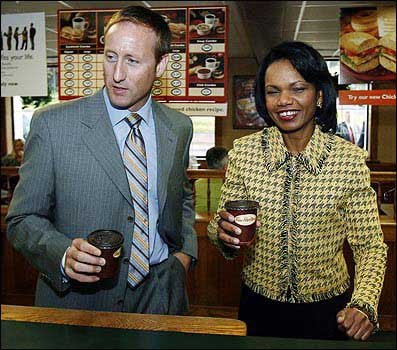 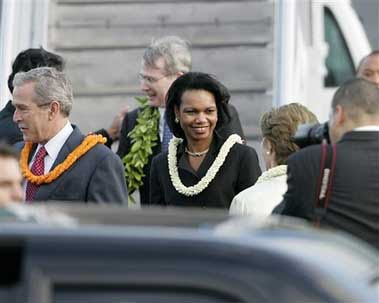 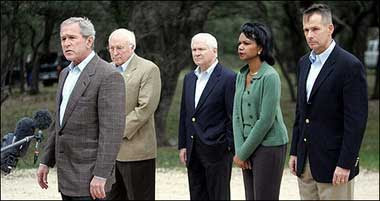 Another crazy year for Condi watchers! Note, however, that 2006 contained the crest of her fabulous trajectory as SoS, and by the end of the year, people would regularly be writing mean things about her and deciding that some dumpy German lady was more powerful. The nerve!

The amount of work that's gone into this is dazzling, especially since you're not getting paid. You, Princess, are A True Artist. Thank you for including us in your spectacular Performance Art.

You know, Pony, as I view these images, I become increasingly convinced that Condoleeeeeeezzzzzza has not only let the American people down, our global siblings down, but you down, especially.

Oh, there have been a few 'do alterations here and there... a cut or two, an upsweep now and then, but La Rice has failed to live up to your life's task.

Hillary Clinton in her First Lady days may have provided a livelier up and down on the old Hairdo Alert, but Condi has spent most of her time in the Guarded category.

Since she didn't do much as SoS, the least she could have done was have provided a little more grease to the alert system.

But that's what the Republican Party does to its stars. You wouldn't even need to develop a Facial Hair Alert System to man of the GOP. You won't see Dubya or the Dick sprouting facial hair after they depart office, even though rumor has it that the Dick is actually a werewolf who ascended to high places.

What the Alert system has done the most of is to alert our attention to a very static lady (never mind all the air travel) in a very static political party.

What next, esteemed Princess?

Ordinarily these EOTR roundups read like filler prepared by assistants so the main guy/gal can take an extended holiday. But youPrincess, your Highness, your achievements are so extensive, and contain so many half-remembered jewels, that a review is delightful. Thank you!

Thank you so much for this retrospective, Princess. I've only been following the blog since late 2006, so it's great to see the history I missed, like the first appearances of Klingon Condi, the Condi-Bot, Arab Kleenex and of course, Our Ursula.

And as sfmike points out, it's wonderful for you to do all this work for free, just out of love for your readers, who love you right back.

Thank you for inspiring me to drop my more humorous comments here at your blog, PSP.
What an inspiration you've been.
:*

When the real history of this disastrous administration (which doesn't understand history) is written, PSP's blog will be a primary source -- in both senses of the world.

Princess, you have captured, through your blog, the essence of this eight-year regime of renegades, which was all show and no substance (and you managed to do it in a witty, Voltairean way that would make Dada-ists jealous).

"Dr" Rice was of course a key player in this freak show, selling whatever soul she has only to have a sole, in the final episode of this Dubya-directed horror film, hit her buddy in the WH -- a summary of her (and his) achievements.

I'm sure I'm not your only fan hoping that your observations on contemporary America will continue, in this or any other form.

In many ways, PSP is a political pundit the way Will Rogers was in his day.
Anyone who wants to get the gist of Rice's misadventures for the last 8 years can get a pretty accurate overview here.