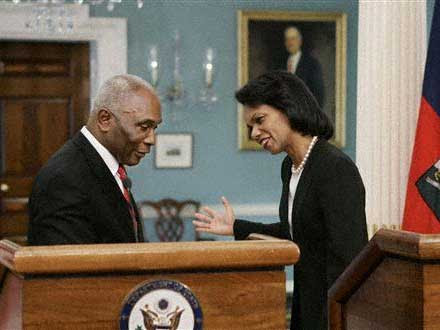 I think it just wasn't Team Condibot's day, that's the only way to explain it. I mean, look at that picture! That's clearly not the real Dr. Secretary, so it must be the labor-saving, Disneytronic Condibot, and just as clearly the programming has gone horribly awry. Tsk.

You want more evidence? Well, as Pony Pals™ know, I've categorized the different kinds of Condiography setups: the matching armchairs, the dueling podiums, the have you met my friend? He/she was just leaving (also known as the Bum's Rush), etc. I think my favorite photo-op is the Madison Time, in which Condi 'n' pals appear to be treating the Condirazzi to a rousing performance of the early-60s dance craze. Madison Time is a tricky photo-op, and as you'll see below, the Condibot, accompanied by the Dutch Hula-Hoop guy and wee yet perfectly-formed Robert Gates, simply wasn't up to the task: 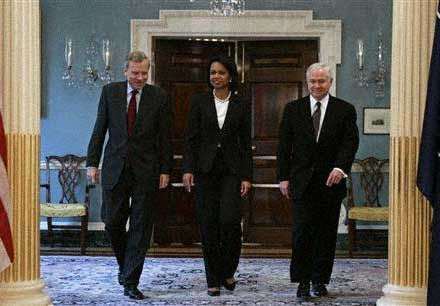 Oh, terrible footwork! They're all over the place! I believe the Condibot is a poor choice when performing the Madison is required; let the real Condi shine in these situations. Anyway, then those three crazy kids did their stand-up routine: 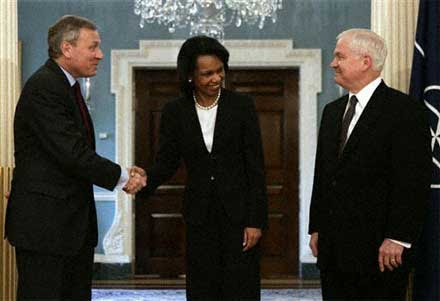 Watch out, Condi! The Hula Hoop guy has a pie behind his back!
Posted by Peteykins at Wednesday, April 04, 2007

Should've built here in Germany as opposed to China... she'd have a much nicer chasis.

You crack my shit up!!

Definitely the 'bot in photo one. Was she stuck like that for very long? The 'real' Dr. F is probably on a little spring break of her own. The White House criticizes the breaks, but then off to Crawford or the shoe salon these folks go.

Karl Rove goes back in the box.

Somebody needs to put in a work order for the Condibot's turkey neck.

Picture one and picture three have the Condibot in eerily similar positions, right hand extended but looking to the left. Those subroutines need to be thoroughly checked.

Also secretary general of NATO? Didn't they used to have cool job titles like Supreme Allied Commander? Secretaries general are for outfits like the UN and the EU, those surrender monkey types.

I'm shocked everyone missed it.
With Fred Thompson contemplating throwing his jowls into the ring, clearly Condi thought posing for a classic "Law & Order" pose would engratiate her with Fred.
I mean, at this point, who else would hire her after the Bush ship sinks?

it's definitly hard work keeping track of teh ms. roboto, for condi's future, contemplate, that exxon did name an oil tanker after her, it's like a 900+ foot floating resume on an ocean of just-past-peak sweet, light crude, mmmm crude, soon cheney will be following her around from the bushes!

This is at least the third instance of bad handshake algorithms. Who knew that would prove so hard for the Condioanimatronics department?

Actually the dancing trio reminds me of a Bush-era version of the Wizard of Oz...

Actually, in photo 3 the SecGen is trying to amuse the inordinately jealous Condi by hanging trash on Ursula's scarves. And Condi bit! For shame!

this is like the first PANTSUIT in a bazillion years. Please please please Condi wear keep wearing them. No more 80's nyloned legs splaying out at extreme angles. ugh. *shudder*

That first photo tells me the bot is broken and maybe not fix-able.

At least we don't get the criss-cross-applesauce crazy legs when she's standing. Didn't anyone teach her to cross her ankles like a nice young (and chaste!) lady?

Maybe they store the condibot in the White House front hall closet just under the shelf of bowling balls.

It looks to me like something heavy fell on the bot and bent her head forward in an awkward and totally unnatural manner.

Yet, in this administration awkward and unnatural pass completely unnoticed.

As something of a gourmand, I wonder what Condi eats to look the way she does...I mean there is no humanity to her flesh ...what would Rubens have done trying to paint her ... just wondering, hope this is not politically incorrect or insulting to anyone, esp Homeland Security...

I feel pain whenever I look at the Condibot's thumb.

Now, that's what I call a big strong line!

My favorite part is Rice 101, where I learned a lot of nice rice facts ("rice is naturally sodium- and gluten-free, and hypoallergenic"; "whole grain brown rice contains the germ and bran layers, wherein lie the majority of beneficial nutrients like antioxidants, phytonutrients, vitamins and minerals"). I thought the coolest thing was the "Rice Wall of Fame," featuring a medical-type illustration of a blown-up grain of rice. You click on a microscope and learn the names of the various parts (like "endosperm," the actual inside of the rice grain).