OK, OK... I know I've been a little sour lately about Condi, but I have a duty to keep everybody up to date on Condi's fashions and minute hairdo variations, because those Ferragamos aren't going to spot themselves, are they? OMG, so speaking of Ferragamos, here's a fine pair appearing with La Belle Rice and one of her gal pals caught on film by Sparklefave Yuri Gripas earlier today: 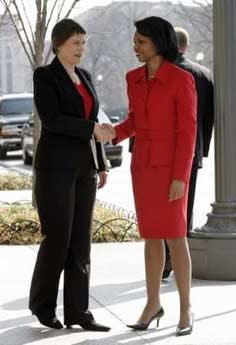 Isn't that cute that it's like they're all chromatic opposites 'n' stuff? We've seen this before, too. What's up with that? Why does it seem like successful female world leaders want to appear as opposite of Condi as possible? I simply can't think of any reasons! I don't know; I just can't grasp the symbolism here.

Anyway! OK, so yesterday was a busy Monday in Condiland, filled with cuddles 'n' hugs for just everyone! Well, not everyone, as you'll see later. But she did a dueling podiums photo-op with this great guy: And I just love that guy! He always gets so excited around Dr. Secretary! I wish CBS would give those two a sitcom.

And speaking of Ursula Plassnik, which we weren't (whatever), Condi spent a lot of quality time with Ursula's German pal yesterday before she had to contend with Señor Solana's flailing extremities. Here's the classic, ever-dependable matching armchairs shot: 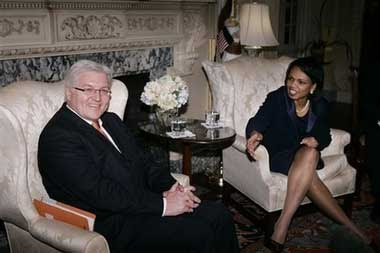 You remember him, right? Staring at Ursula's chest? And doesn't Condi look like she's clenching up her nether regions more than usual, like totally twist-tie city? Well, I think this next picture, from earlier in the day, helps explain that. Indeed, it seems that Herr Steinmeier was trying a little to hard to impress our chaste diplomatrix: 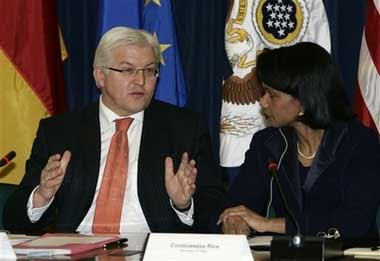 And that's two days in the life of our Secretary of State! I'm giving two glittery hooves up for today's red suit and, obvs, her glamorous footwear. Yesterday's velvety blue? Eh, it was OK. What lies ahead this Condiweek? Isn't she going to that lesbian place again?
Posted by Peteykins at Tuesday, March 20, 2007

What a dizzying array of Condimania. I am weak with it all!

One more thing... is it me or is Helen Clark a little Helen Reddy-like? Very "I am woman hear me roar!"

Take another look at condi behind the podium. The tendons in her neck are straining, her lips have tensed, and her eyes are locked on-target. She's obviously about to hawk a loogie...

Ach du lieber! The German guy isn't describing size to her, is he???

You outdo yourself with every posting. This one is one of your best EVER.

It even makes me want to buy high hells (sorry, heels)

Yes, Ursul-iaztion of PSP is almost complete. Even when she isn't in the pictures, she's still the topic of conversation.

And Condi is reaching out for Frank, who is smiling for the camera and ignoring her completely. AWK-ward!

The war has only been going on for four years and people are starting to get antsy. Buncha Eurotrash pantwaists!

What's up with the matching armchairs shot? Were they in a completely dark room? And Condi looks like she is trying to get back his attention so she can finish a dirty joke.

Listen, those shoes are narrow and pointy. Any woman who's ever worn-or even tried on a pair of shoes like that will tell you the pain they cause would ruin even Mother Theresa's disposition.
That's why Ursala's so perky- she wears sensible shoes.
Condi's a snarling seahag because her feet hurt. That constant scowl on her puss is caused by foot pain.

Thanks for the ladies' perspective, Karen. I hadn't thought about the shoes before, but we almost never get a picture showing Ursula's shoes. But it does bring the whole equation together.

Crazy clothes + sensible shoes = lotsa loving from the happy hubby and a long line of boytoys at the door.

Sensible clothes + killer fashion shoes = "Sex and the City" lifestyle without the sex.

Karen, I think you have nailed it - and I'm not so sure that Ursul-iaztion wouldn't be a good thing.

Umm, if your shoes hurt even if you're just trying them on, you're wearing the wrong size. 3" heels will hurt eventually but not as soon as putting them on. Anything lower, regardless of style, should not hurt at all.