Because YOU Demanded It! A History of Harriet Miers' Hairdo, 1983-Present

OK, OK! I surrender! I usually get all shy when a major story breaks in the blogs. Usually I'll just let John at Americablog post his 300 posts about Rovegate, for instance, and write about something else. Because, I mean, when you've got Atrios 'n' Kos 'n' this blogger and that blogger all over these stories like ducks on a junebug, why do I need to get involved? What am I going to add?

I guess I'm supposed to add mean remarks about hair, makeup and accessories, as several readers have reminded me via comments and email pleas. So although I might have gotten away with ignoring John Roberts, more or less, the same is not true of spunky Texan Harriet Miers. Pony Pals™ rose up with one voice and hollered, "Thou shalt comment upon her bad eyeliner! Thou shalt compare her to Amy Sedaris' Jerri Blank! Thou shalt seize upon those many baubles upon her unstylish sweater!" OK, so here we go. You asked for it:

1983: Gimme a G! Gimme a O! Gimme a P! Harriet's ready to pop with excitement in her kicky supermodel 'do. But, honey, that Frankenstein forehead you've got there was made for coverin'. (That's the kinda stuff you want from me, right?) This is obviously a post-law-school holdover. What do the hair-turbulent '80s have in store for Harriet? 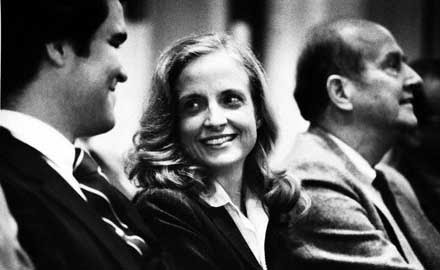 1985: That's MS. Miers, Bub! Oh, what a letdown! Was this when she was saying gays were OK? Because that's kinda a Susan Sontag look. No, that's not it... what is this look? I like how her bangs crawl down that epic forehead like a wayward starfish. You decide: 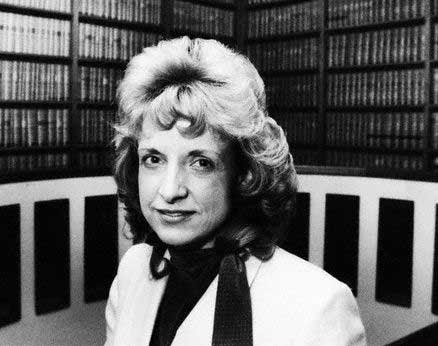 1989: Disaster Strikes! Whoah, the '80s really end on a sour note for Miers' hair, and how about that double-breasted suit? Is she trying to look like a member of REO Speedwagon or something? 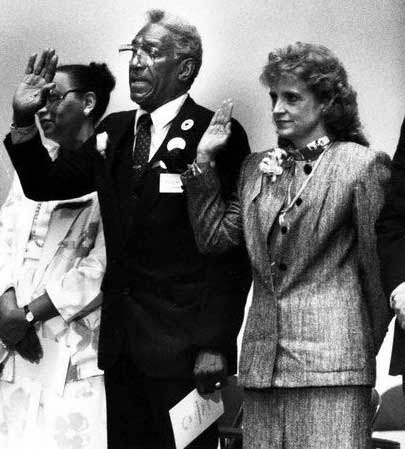 1992: Prelude to Dowdiness. Luckily, that horrific mullet has fallen down into something a little more normal, but pretty uninspired. It doesn't say "Judicial" to me at all. Also, please note that Harriet's liquid eyeliner problem hasn't surfaced yet: 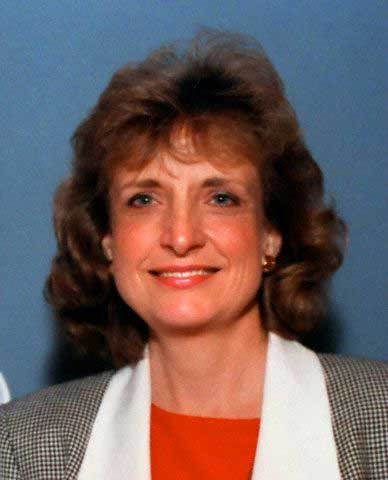 1996: Tedium Sets In. As you can see, the above hairdo lasted for several boring years. Am I detecting some experimentation with color, though? In some photos, it looks a lot more auburn. But below, it's very mousy: 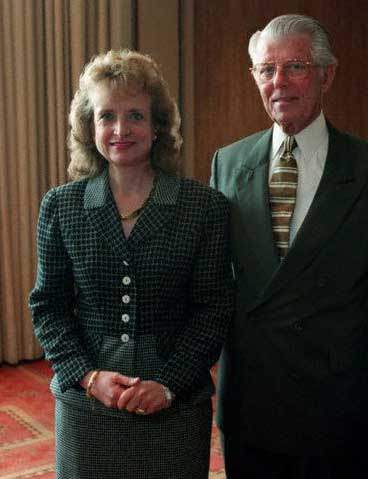 Here's another one from '96. Those wispy bangs and foot-tall forehead have been living in an increasingly uncomfortable symbiosis for some time, now, and it ain't pretty: 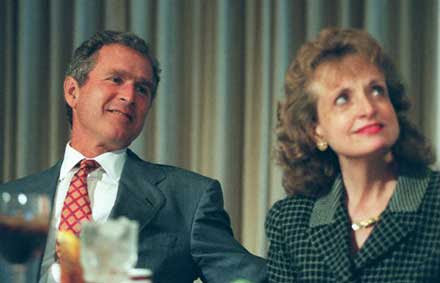 1998: Rich is In. OMG, here's where I comment on her ugly dress and bad accessorizing! Ha! IN YOUR FACE, missy! Gone are the wispy bangs. They are not terribly missed: 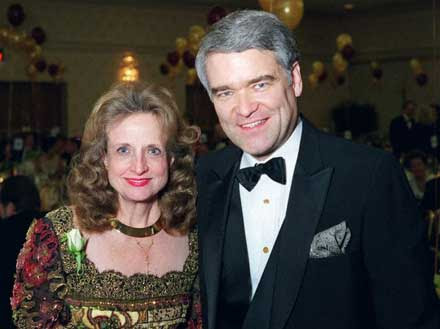 2001: The Bangs are Back! I wonder if the girl in the top picture ever thought she'd be dating guys like this: 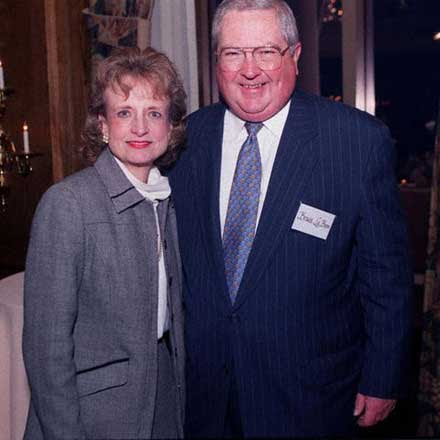 2002: But You Can't Take the Texas Out of the Girl. This down-home look is obviously Harriet at her best. The Southern-style hairdo is clearly brand new, and the clothing and accessories are supremely tasteful. And grey? No way! She had good stylists for this shot (even if, tragically, they seem to have introduced her to her nemesis: eyeliner), but it seems like everything fell apart shortly thereafter: 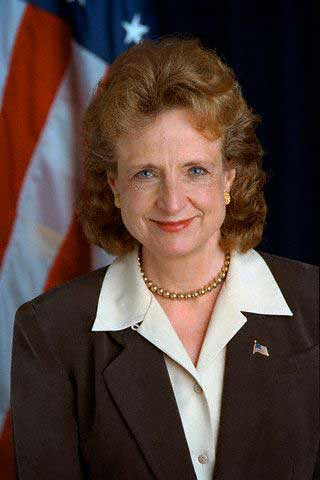 2004: The Brick Wall is Hit. Off with all that pesky hair! In with those feeble bangs again! And, look! It's Condi! Do you remember that day when Condi was famously photographed looking all pissed off next to the American flag? I used that picture to make many a swell Photoshop. What a fun day that was! Oh, sorry, I got distracted. 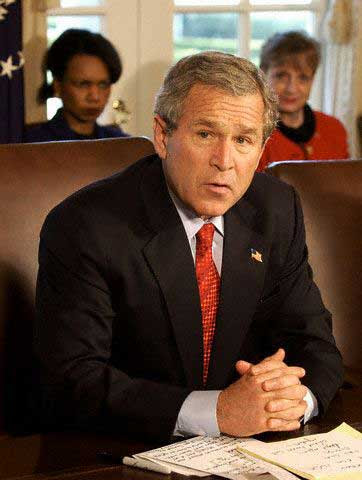 Also 2004, the official flagshot. This is more-or-less how Harriet appears today. Note, of course, the full-blown eyeliner addiction. But there's still something wonderfully starfishy about those rascally bangs: 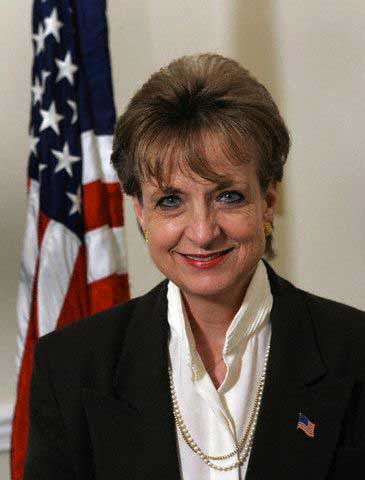 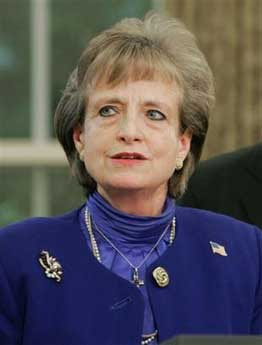 OMG! She's wearing too much jewelry!

There. Satisfied?
Posted by Peteykins at Tuesday, October 04, 2005

The girl in the top picture is almost pretty. She looks natural and comfortable in her blouse and blazer. Slowly the innocence fades, the smile dies and is replaced by a mirthless grin. Its a sad series of pictures, like that one of the crack whore arrests over the years. Thank you for your research.

thanks for the harriet blogging and the meta-blogging.

but didn't you see W in a live press conference refer to her as "plenty bright"?

I am nominating this post for a Nobel prize in literature.

women with football foreheads should always wear bangs...
Where is a Mary Kay rep when you need one!!! And she is from Dallas!! I am sure there are more than a gazillion there...home of Mary Kay!!! Get her one quick!

Well slap on some boots and call me Daddy! I don't know how you do it, but I really like that you do. She looks almost human in the 2002 shot. I thought Satan was supposed to be seductive.

This is what has been left out of the coverage so far. You have done America a great service, Sparkles, God Bless you.

You should be ashamed of yourself for being so crude and heartless. Not everyone is born pretty or is taught the finer points of makeup and how to accessorize for success.

That being said, I’m looking for a Harriet mask for Halloween--to scare the crap out of the neighborhood kids!

Jesum Crow, can no one trim her bangs evenly? Hell, even HairCuttery can do that for $11, and they suck!

Does Karl Rove not have any time to hire a few image consultants for her? The Laura Mercier counter at Neiman Marcus could teach her how to avoid the racoon eyes, and Nordstrom's will give her a personal wardrobe consultant for free, dammit!

She's a dead ringer for Cher's son in Mask.

It's interesting to observe hair styles from past to nowadays. I see that in the past they liked hair with big volume, more curly.

I like today's hairdo much more. Or maybe it's because I got used to see modern hairs everyday.

Pretty interesting site you've got here. Thanx for it. I like such themes and anything connected to them. I would like to read a bit more soon.