Condi Veep Rumors Never Really Die; They Get Reborn with Down Syndrome 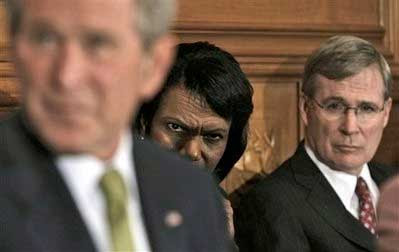 OK, first of all, take a few minutes to contemplate the above photo, stunning in its horribleness, and easily the worst shot of Klingon Condi we've seen in some time. Done? Let's move along.

Next! Proof that Condi really, really isn't paying attention to the news: she hilariously repeated John McCain's idiotic "the fundamentals of the US economy are strong" line, and even incorrectly attributed the statement to Bush. LOL. Try to keep up, Condi, won't you?

But here's the biggie, the one I have to write about RIGHT NOW so that people will stop emailing it to me: some guy named Ian Halperin** has posted an absolutely absurd article (posted also at Pageoneq) in which an anonymous "mid level member of the Republican National Committee" claims that Condi was, in fact, going to be McCain's running mate until they got nervous about the lezbo rumors and settled on Sarah "Dumb as a Rock" Palin instead.

This article was obviously written by somebody with no knowledge of how the Condi veep rumors started in the first place, or when they died:

“Once Obama selected Biden instead of Hillary,” said the source, ” they had this theory that Condi was the perfect candidate to put up against him. She’s tough, conservative and a hawk, not to mention a football fanatic, which would be more than enough for white men. They never expected traditionally Democratic Blacks and women to vote for her in large numbers, but argued that if she could just sway 5-10% of Blacks and 10% of women to defect, it could be enough to tilt the election towards McCain in a number of crucial swing states. At this point, Palin still wasn’t on anybody’s radar screen.”

The problem with this scenario is that by the time Obama picked Biden as a running mate, the Condi Veep Rumor Machine was already ancient history. You can read my chronicles of the rumors, including the exact moment they started and how they died, here and here at Wonkette (and here, um, here) if you need a refresher course. Basically, she was totally, unequivocally out of the picture months and months before Obama picked Biden. Furthermore, the McCain campaign appears to have never seriously considered Condi as a veep choice* in the first place, because they knew she just wasn't into running for public office, as she has said over and over to whomever would listen.

And beyond that, the article just goes over the same tired old Randy Bean stuff. The end.

*There's a good chance that speculation over Condi's sexuality (ew!) is part of the reason why she was never seriously considered by McCain, but that's not what the article claims.

UPDATE: LOL, Mr. Halperin posted an update saying that Dan Senor had "confirmed" that Condi had veep aspirations. Remember that Dan Senor stuff? He's the one who repeated Steve Clemons' "Condi met with Grover Norquist" on Good Morning America and got the whole Condi Veep Rumor Machine started. Here's how it happened.

**I read up on Ian Halperin, and it's obvious that he's a bit of a scoop-crazy attention seeker. I think he believes that this is a major scoop, but he's obviously out of his element with this effortlessly debunked muddle.
Posted by Peteykins at Wednesday, September 24, 2008

coz this is Thriller!

At least I think it was switched, it's so long ago.

Is she trying to kill the photographer with her laser-death-ray-eyes? *zap*zing!*

I'm also LOLing at Hadley's "Bond. James Bond." expression. As if, Latte Boy. Now go get me a grande or I'll fire your ass.

I thought that was a photo of James Brown.

Wow, if that isn't an unfortunate, bowel-twisting, soul-shrivelling look of pure hate.

Jesus Christcakes, Princess! A little warning before the scary shots. Ten bucks says I'm going to have a nightmare tonight where Condi eats my eyeballs or something.

Holy Shit!
Condi looks like a Sharpei/pit bull mix after losing a dogfight.
And look at Hadley. His face doesn't match on both sides.
What the fuck- are these people wax figures timed to melt after 8 years?
Ghastly!

I would feel better commenting on this picture if it included the "amazingly not photoshopped" label.