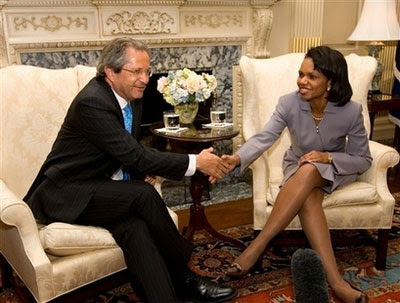 OK, so this thing has gotten totally out of control. Fun! But please, let me toss my sparkley, combable mane impertinently and state for the record that as one of the nation's leading experts on Condoleezza Rice's hairdo and sunglasses, I can absolutely assure you that America's Princess Diplomat will NOT be McCain's running mate, did not appear at Grover Norquist's little confab to angle for the job, and will never run for public office of any sort. There!

Look, I know it's painful, especially to journalists, but there you have it. Do you want a roundup? OK:

Will the speculation stop now? Oh, please. You know better than that.
Posted by Peteykins at Wednesday, April 09, 2008

This calls for some Condi haiku!

Condoleezza Rice
Can't be second banana
Randy Bean, get it?

Condi Rice wants it
But she can't have it, baby
She's a Lebanese

Incompetent Rice
Fucked up on nine-eleven
Fucked up in Iraq

Doc. Ferragamo
Please go back to Stanford U.
Doctor made us sick

McCain is a Big Business Republican, but he doesn't have the support of the Big Church Republicans. The last thing he needs is a Big Closet Republican on the ticket.

Also, seeing her awkward photo ops with Don Cheadle and Kristi Yamaguchi, I don't think Condi has much talent for kissing hands and shaking babies.

Those are inspired! Wait, let me try one:

We love your black boots
McCain and Rice? Mighty nice!
When Hades freezes

Condi is too busy floating trial balloons about being John McCain�s running mate to bother about the fact that she was instrumental in two historic blunders: 9/11 and Iraq."

One Manoloed step
Down an evil shadow path
To Condiveepland!

The world is waiting
breath bated, eyes screwed tight shut
For this not to be.

Still, we can assume
Condi on McCain's Ticket
Means he won't be Prez

b-b-b-ut if she was slightly maybe thinkin about it, and did, then you could have your website like FOREVER, psp! like, don't lay your eggs all in one handbasket to hell, to mix metafaws!

She can't be VP; she has to return to Stanford and help John Yoo get their graduate program in torture up and running.

cynica: Yoo is at Cal. They ain't hooking up. Think oil and water. Cats and dogs. Shias and Sunnis.

There's a difference between Shia's and Sunni's? Heaven forbid!

Methinks the PSP doth protest too much.

Yay! Condi wins VEEP
Holds her reception at the
Very gay Be Bar

It's okay, Condi
You can uncross your legs now
Show us your big shlong

Condi wins, then sez
You think old Dick was a dick?
Ha! Check this one out!!