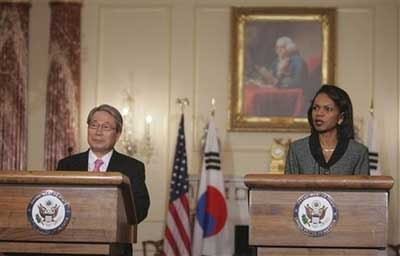 Wheee! So Condi went to talk to anti-tax bear Grover Norquist's little club today, and, oh, my! The Washington Note just fell into absolute spasms of overthinking and speculation and hypothesizing (two stories!) about what it all means.

BREAKING, they holler, Condi Rice Flirts With VP Possibility -- Speaks to Grover Norquist's Wednesday Group Meeting. OMG! And then they proceed to report... nothing of the sort. And then the whole thing devolves into that same article we've read a million times about rumors of Condi running for office. And like all these stories, there are explicit denials from the Princess Diplomat herself.

Oh, Washington Note, you're cute when you get excited.

I know that Democratic dirty tricksters are no match for the GOP's Swiftboaters and Karl Rove, but Condi's lesbianism would not stay closeted if she aimed for the VEEP job.

Oh, and one more thing...does Condi plan to keep meeting with shorter and shorter men until next January, when she'll meet with Gary Coleman on some tropical island to discuss human rights?

You could be right! The other day she met with a very short man from India!

But is Grover short? Are we just assuming that?

When will the media stop using that pre-DC fugly picture of Condi. Aging and the DC area have been kind to Condi...and airbrushing, too.

Dr. Diplomat's stepmother in one of those boring Condiographies I read said that Condi would never run for elected office because she is afraid of losing and cries easily when she doesn't get her way.

Condi to Stepmother: Thanks stepmommy for sharing your psychobabble.

Thanks! I did get a bit excited. And just to be clear -- I didn't say she would be VP...just said that people don't speak to Grover Norquist's group of movement conservatives to sell foreign policy achievements...

It's hard to sell achievements when you haven't made any.

Oh,ye of little understanding. When, not, if, race becomes a central issue, having Condi on the McCain ticket does offer Obama/Clinton malcontents (20%?) better cover.

It would also be acceptable to the Republican base because they can now boast of an achievement not seen since carpetbagger days. What's the alternative? Stay home?

A note from the Washington Note! Yay!

I viewed Condi's appearance differently, as more of a "I've got to shore up my Republican bona-fides to secure my future employment" kinda thing.

How come there appears be be two Korean flags and only one Merrikun flag? Typical of the insouciance of "Dr" Rice's incompetent State Dept crew ... what would Thomas Jefferson have said about this vulgar, Bush ass-kissing little lady with academic pretentions and a totally empty mind ...

I for one hope that your interpretation of Lecondel's motives is correct, Princess. The thought of her standing next to McGeezer in hundreds of photo-ops really creeps me out.

But then again, you'd have enough blog material for years and years worth of glitteriness!

"...what would Thomas Jefferson have said about this vulgar, Bush ass-kissing little lady with academic pretentions and a totally empty mind"

"What was I thinking? I must have words with Ben about his hemp-and-ale parties &tc. I just hope she's not knocked up! That's all I need right now."

The portrait of the Founding Father behind her is of course Ben Franklin
http://johnjhenderson.com/images/White%20House/Portrait%20of%20Ben%20TN.jpg

(One wonders, btw, to how the charming Ben would have reacted to oh-so-always-serious "child-genius" Condi, had he a time machine and even bother to venture to visit our horrid century; one need not speculate that he would have recognized her, in an instant, as the total intellectual fraud that she is, no matter her so-called academic "degrees" from minor "heartland/homeland" learneries).

(How would Jefferson have reacted to the Ph[ony].D Bush-stamp-of-approval "doctor"? I suspect, upon knowing that "Condi" was "in charge" of US foreign policy, by opening a wine bottle from his (Jefferson's) well-stocked cellar at Monticello; and, more importantly, by re-reading the classics about human vanity and incompetence).

@anonymous: Well the lore at U.Va. was that TJ (as Jefferson was known) never got a PhD. And out of deference to him, no PhD's at U.Va. were called "doctor" either, only MDs. All professors were called "Mr/Mrs/Ms" but never "doctor." So he'd probably be jealous that she with her PhD could so sully that fine office.

Wherever was Condi for so many months? She dropped off the face of the earth some time after she vacationed at "The Ranch" with her boss. Now, all of a sudden she reappears as if this lengthy absence wasn't even noticeable??