Quality You Can Feel 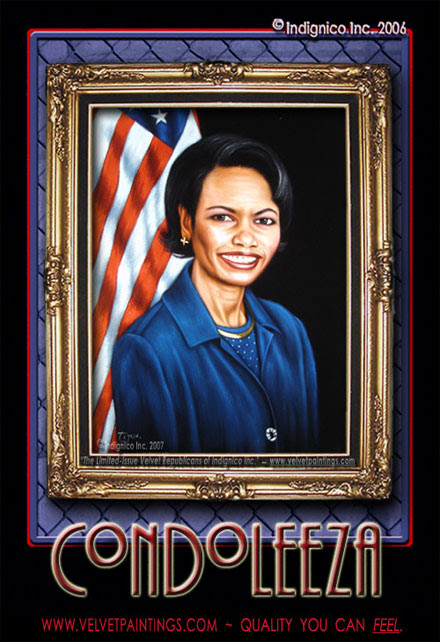 OK, so the latest Condi Roundup is up at Wonkette, and this time it's more than just a rehash of stuff I've already featured here. Since Condi was boring last week, I took the opportunity to find some inspirational Condi artworks around the web, including some surprising odes to her hairdo and shoes by Karen Finley (!).

But I really have to feature more of the jaw-droppingly gorgeous black velvet Condi on eBay. It's a Buy it now, so I've taken screenshots of the wonderful, wonderful page for the item, just in case somebody buys it and we lose something beautiful. I especially love how the chain-link fence and the Led Zeppelin lettering shown in the picture above conspire to add a touch of grandeur to the presentation.

Almost as good as the painting itself is the bizarre poetry of the sales pitch:

No American Citizen Should Be Without One.

And then it goes on and on AND ON from there. It seriously never ends, and OMG it's just about the greatest thing I've ever seen in my life.

UPDATE: Commenter Randy points out that nothing says respect quite like misspelling Condi's name!
Posted by Peteykins at Monday, February 11, 2008

OMG I love the cheesy little animated GIF of the guy with a "bid" sign jumping up and down. And that it comes from Tijuana! Tres internacionale!

"I am NOT the Secretary of Defensiveness!" Condi says defensively.

They had me at Indignico.

PSP I'm sure if you asked your readers nicely, we'd all pony up enough for you to win that painting for your very own fine art collection...
I loved the shmaltzy copy the artist Tejeda added.
Being a Yanqui from DC, you may not realize that Tijuana is truly the velvet art capital of the world. A specimen such as this is a rare find.

Karen, I lived in San Diego for many years, so I'm thrillingly familiar with Tijuana's status as the world capitol of velvet painting. I have a beautiful example of a shirtless man with a huge afro cradling an unintentionally but nevertheless deformed baby.

I agree with karen, you should take up a collection. Other, lesser bloggers have fundraising drives for far more inconsequential reasons, like disaster relief and rent assistance.

I think this portrait has to belong in the permanent collection of your highness.

Thanks for this, your Highness. What I wouldn't give to be a "Professional Velvet Elvis Artist."

Yeah, if John Halitosis over at Americablob can beg readers for his underwear and grocery money, surely your kazillion readers can pony up $5 each to buy you that painting.
And PSP I know that painting of Afroman and child. My late husband had a Tijuana velvet painting of the Pink Panther sitting on a toilet holding a syringe and a martini glass.
Let's get that PayPal account loaded up and start the contribtions--before it's too late!

Thats a crappy portrait. Her teeth don't look that nice.

"Presidential-style," no less. Just which president's style are we talking about?

what i'd like to know is-- what is up with the blue necklace? can you date that hair style? i appeal to your expertise.

They spelled her name wrong in the painting... they only used one "z."

This is a portrait of the Condibot.

As to the spelling - whoever did the painting has a better command of the rules of spelling than Condi's parents. Two vowels, one 'z', one vowel, two 'z's - I don't care if that made-up name is faux-Italian, it's ridiculous. And pretentious.