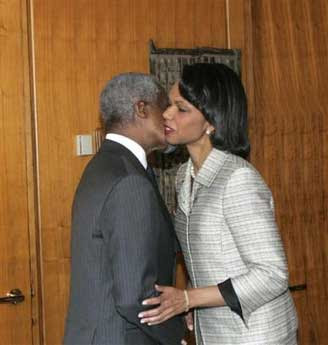 Secretary of State Condoleezza Rice (L) meets with UN Secretary General Kofi Annan at the United Nations in New York May 9, 2006. Foreign ministers of major powers failed to come up with a joint strategy for dealing with Iran after Tehran sought to influence the negotiations with a stunning last-minute diplomatic maneuver, officials said. (Chip East/Reuters)

Yes, yes, they make nice for the cameras; they hug and they kiss, and it's all a grand time, I'm sure. But body language doesn't lie: 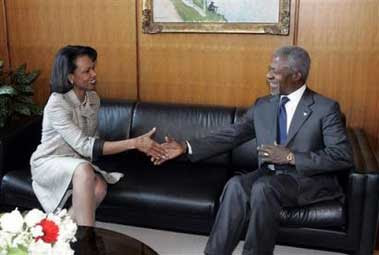 Um, I'm sure they could have could have sat further apart from one another, but then they'd have to dig up an even longer couch. Make no mistake, Condi 'n' Kofi, as sitcom-ready as it sounds, just isn't a very good pairing. This is the price our beloved heroine must pay in New York: for every fabulous trip to Bergdorf's, there's a tiresome United Nations endurance challenge to suffer through. It's nice, though, to see that Condi's rebound relationship with sparkley-new British Foreign Minister Margaret Beckett has progressed rapidly to the delightful girlfriends-whispering-in-each-other's-ears phase: 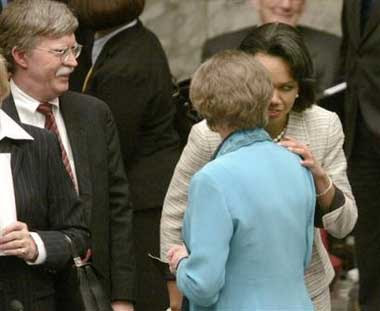 And you know just exactly what she's saying, right? "Pssst... Maggie! If you see his mustache start to twitch, or if he starts compulsively straightening his eyeglasses, run like hell!"

But I think the day's most charming moment came when Condi bestowed a great, rare honor upon China's Li Zhaoxing: 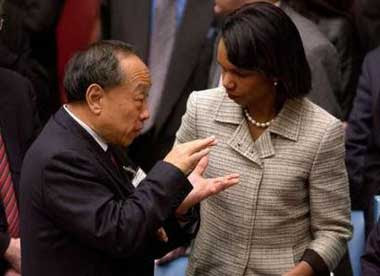 Yes, she allowed Chinese Foreign Minister to briefly hold 'n' cuddle her invisible friend. Now that, Pony Pals™, is diplomacy.
Posted by Peteykins at Tuesday, May 09, 2006

The Chinese Foreign Minister looks so happy with the Condi invisi-koosh! How CUTE!

I think the Kofi and Condi couch spacing thing was a mistake on the photograher's part. Note the tasteful flower arrangement in the blurry close foreground.

I submit to you, that, properly angled, that flower arrangement would go between the two, in that seemingly chilly black leather gap. When in fact, what was meant to happen was for magical flowerly bridges of love and understanding to close the distance! If only that photog knew!

Heads will roll, mark you...

I think Margaret has colour co-ordinated days (possibly to help her remember what day of the week it is) Monday is obviously Orange day, Tuesday seems to be Turquoise/Blue day. I wonder what colour she chooses for Wednesdays...Green? Pink?

I see Condi's designer has been shopping at the upholstery fabric warehouse again.

Isn't that the same cheesy-assed suit we saw her in last week?

I think the Chinese Foreign Minister is trying in vain to actually "see" the invisible friend..must of lost something in translation to him..

I think the C-K distance on the couch is appromiximately that of, say, matching armchairs with a low table and a box of tissues between them (though the tissues are a middle-eastern thing, they're everywhere! offices, restaurants, taxis...)

Further proof to my theory of tasteful flower arrangements. They are always in the foreground. It is up to the photographer to align things correctly.

Also notice Kofi moving his other hand to cover other parts of his body. Clearly concerned about his proximity to Condi.

I know you love your Condizoom so I wanted to pass along this photo. Check out photos 4 and 5 too.

I saw the moment on TV when they were getting ready to sit down, and Condi looks at the couch and has this split second look of discomfort, as if to say, "I can't believe my advance people didn't set this photo-op up properly."

Condi is sitting on the very edge of the couch because Kofi probably sleeps on it when he's pulling all-nighters. And I'll let you guess which end he puts his feet up on.

The invisible friend is actually chi force, a projection of the human energy field used frequently in the more mystical branches of martial arts. I think Luke Skywalker also used it or something.

Basically, Condi is letting him know she is armed and dangerous. Diplomatically speaking, this is like letting him momentarily hold a tactical nuke.

On The Rebound said...

If only you knew how my day was going. I was searching for one thing and I ended up here. Now you see how that might affect me!