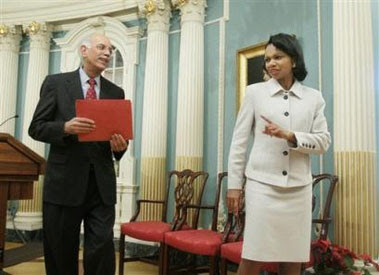 I read today, with a tear in my eye, about the departure of Andrew Natsios from the Bush Administration. He was the guy who promised, promised, promised that the war would be inexpensive -- a bargain, even! But then I felt better for him, because who got to show him the door? Why, Princess Condi herself! What a lucky guy!

That photo above is by AP photographer Manuel Balce. It's not bad, I guess. But I know my Condiographers, and I've got my preferences. For contrast, let's look at a real master at work at the same event: 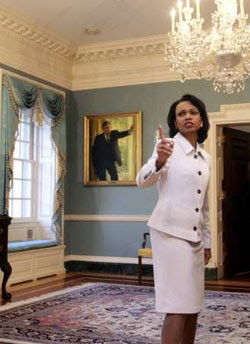 Sublime! That was taken by my favorite member of the Condirazzi, Reuters' Yuri Gripas, whose superlative work I've featured many times. Look at how he targeted that painting in the background , and stood in just the perfect spot, patiently waiting for Condi to make one of her trademarked spasmodic hand gestures as a perfect foil for the painting. Two sparkley hooves way, way up, Yuri! You never let a pony down.
Posted by Peteykins at Friday, December 02, 2005