Annnnnnd My Server Goes Down Again

It looks like my web host is down again, perhaps as a result of the LA power outages (EDIT: This was, indeed, the case). Meanwhile, here are some pictures of Condi linked directly (for now) from Yahoo news: 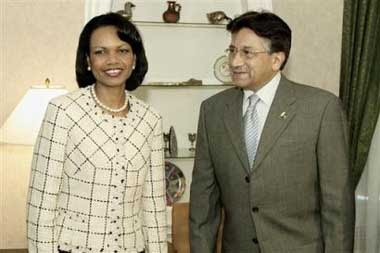 That's Condi earlier today with the President of Pakistan. And here she is yesterday with Mayor Bloomberg at the 911 anniversary ceremony: 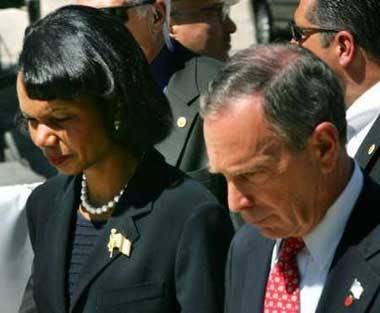 Check out her mighty lapel pin! But are you thinking what I'm thinking? Condi hasn't had an "updo" day in a long time. I might have to actually lower the Condoleezza Hairdo Alert System™ soon if she doesn't do something. Also... same strand of pearls two days in a row? Oh, Condi, how could you?

UPDATE: Server back up at about 8pm. Also, a commenter pointed out, correctly, that there are most certainly some hairdo malfunctions going on in yesterday's pic... just enough to keep the CHAS™ status where it is.
Posted by Peteykins at Monday, September 12, 2005

I don't know about this hair safety...... I'm worried about the 'half-bangs' thing going on (or overdone swoosh???). Reminds me of when I tried to cut off my bangs in gr. 1 (only Condi's sort of done it vertically).