Here Are Your Condi/Aretha Pics 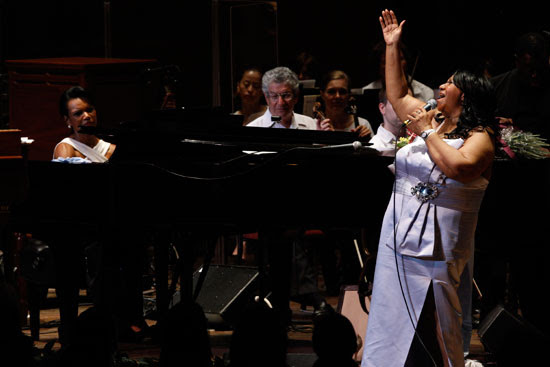 So there you go: it really happened! The Washington Post was on the scene:

Putting Aretha Franklin and Rice together on the stage had a kind of goofy brilliance. It was evidently Franklin who decided that the two should perform together; she may have sensed, with the same stage-animal instinct she demonstrated throughout the evening, that Rice would provide curiosity value to augment, or even showcase, Franklin's entertainment value.

There was a single duet with Rice, who emerged from the wings like a vision from a far more formal world, sat down at the piano and began "I Say a Little Prayer."

"You didn't think she could play it, right?" Franklin teased the audience.

But for all that Franklin had supposedly initiated this project, the on-stage interaction between the two women seemed distant; and this music certainly isn't Rice's home turf. In a nod to Rice's political roots, Franklin brought her back out to close with a song that she called "our national anthem" and turned out to be "My Country 'Tis of Thee" -- a mixed political message right in keeping with the general goofiness of the evening.

Here's a photo of the odd couple (not the oddest Condi's been part of) with their bouquets: 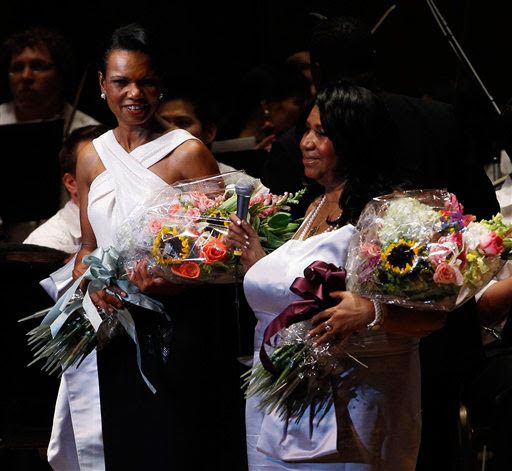 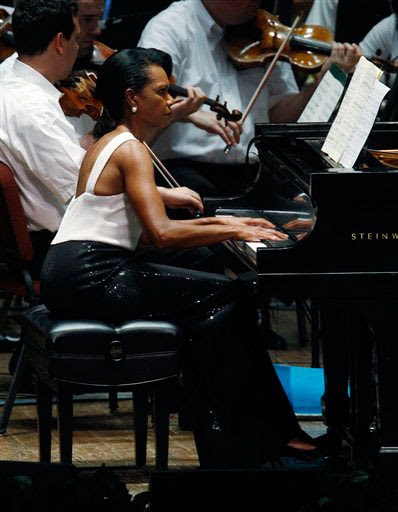 And that, Pony Pals™, is pretty much all we're going to get out of Condi this year.

Now it's Ursula's turn to pop up in incongruous places! I say bongo playing with Sting at a Tantric benefit.

Each morning I wake up, before I put on my make up... and I come to your blog. Late today however.

This is rich. And you are so right about that unfortunate "don't shoot me (photographically), I'm only the piano player" shot.

Seems to me that Aretha has finally started to tackle her weight issue. She looks better than in the past 5 years or so.

Have been trying to find reviews of "Dr" Rice's recent book on her family (mentioned not long ago on your blog, if I recall properly) on the 'Net but have seen nada. Any leads/key words you could suggest?

Your blog is better than ever, although, among your many admirers, this reader of your observations much misses your remarks on the Bush era -- thoughts of yours which, I hope, will be considered by any serious historian writing about such an appalling, indeed catastrophic, period in our national life.

OMG that duet was suckodelic!
I bet 'Retha had a royal fit after that. That'll be the last time those two cats kitties on the same fence.

Let me try again:
That'll be the last time those two kitties sit on the same fence.

mrs.aretha you are still the best thats why you are asked by so many presidents to perform. right now i am playing "in case you forgot" this song is a thrill a love a thoughtful winner. it is humbling. and it represents love in a strong manner. this song has been playing over 72 hrs now straight through you are still deep and refreshing you are more than a diva your the interplanetary goddess, g-url let god keep using you