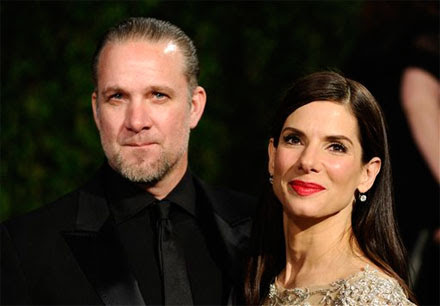 You might be surprised that I'm writing about the whole Sandra 'n' Jesse thing, but I think I can help explain a thing or two.

See, if there's one thing I learned from 17 years in Southern California, it's that people there tend to wear costumes (as opposed to "dressing up," like they do on the East Coast). Everybody is working for Central Casting. People present themselves as types.

In the early 90s, a certain type solidified and became extremely pervasive in the art and music worlds: the retro blue-collar man. I remember going to art shows at La Luz de Jesus and everybody there looked like an auto mechanic, with tattoos, pomaded hair, etc. Their girlfriends wore retro cocktail dresses, bangs, and too much makeup and too many tattoos. The whole "Kustom Kulture" revival was in full swing.

Because everybody was getting tattooed, the tattoo artists got into the galleries alongside the artists who were ripping them off, as did the automobile customizers and... I don't know, probably the pomade manufacturers as well. Everybody mingled together, the emulators and the emulatees. Painters started customizing cars and designing tattoos, car customizers were given retrospectives in art museums, and so on. The final, pestilent denouement of this movement is with us today as we find ourselves surrounded by horrible, garish, Ed Hardy* clothing.

So once you realize that Jesse James is the real thing, a real dyed-in-the-wool macho, trashy, blue-collar shithead, not just playing one on TV, then it's hardly surprising when he behaves like one. And then it all falls into place, doesn't it? The over-the-top stripper girlfriends, the jocular nazi references, all of it.

I used to work with this girl, Rebecca, and she was way into the Kustom Kulture style. She'd come to work every day looking immaculate, gorgeous: sleeveless vintage dresses, period accessories, ample tattoos and perfect, perfect magazine makeup. She was awesome looking, as good as Dita Von Teese, really beautiful... but maybe a tad cartoonish. Like a female female impersonator. Her boyfriend was a tattoo artist with a similarly severe look: shaved head, profuse piercings, boxy bowling-style shirts covered with flames, etc. He was also gorgeous, but not very friendly.

But it turned out that, like Sandra 'n' Jesse, the girl was playing a role and the boy was the real McCoy. I heard later that they had moved away from Southern California, at his insistence, to get away from all the "spics and fags," etc., and had moved to some all-white enclave in the South. For real! This was especially surprising because Rebecca's last name, her maiden name if you will, was something like "Ramirez." Under all that makeup she was, in fact, half Mexican!

But, again, I had mistaken her boyfriend for a cartoon instead of the real thing, and that's what happens over and over in Southern California.

It's honestly something I really don't miss.

*Not to knock Ed himself! Don Ed Hardy and I were in a couple of group shows together in LA, and we had some close mutual friends, so I hung out with him several times. He is honestly one of the nicest people I've ever known. He's an extraordinarily talented artist, and I'm really glad for him personally that he cashed in so successfully, but... urgh, that stuff is awful.
Posted by Peteykins at Friday, April 02, 2010

Glad to see I'm not the only one who can't stand that Ed Hardy crap.

I've been trying to figure this relationship out for the last week and a half. Your view on things helps a lot, Peter.

run girl, as fast as you can to a good lawyer.

Having once worked at a hot rod car magazine in California there are several layers of subtlety here between the rockabilly / rat rod group and the custom culture of the Jesse James types and a lot of is traceable through a very specific vein of California culture related to the armed forces.

But to do so would just prove the point that's it's probably a bit silly.

Still I miss it. I miss the levels of counterculture in California. They are different then they are here in NYC. But it shows people are trying anyway. I like that. DC used to have more of it in the 1990s but the subtleties of the gradations are starting to disappear some.

Christopher, that's a great, clarifying comment. It's true: there was more of a sliding scale between the "reals" and the "fakes" in that scene. Some of the fake blue collar types were utter and complete jerks with real old-fashioned attitudes, while some of the more "genuine" types, like my friend Dave Gibson, the tattoo artist, were great guys with enlightened attitudes.

That's what made it so confusing!

I had to google Ed Hardy to see what the fuss was about. Now my poor eyeballs will take months to recover.

I run into this crowd the most at Club Congress, and there are many distinctive subsets of the subculture. But it all reeks of ossification of fashion.

What a great take on this, one that pretty much everyone else missed.

I'm the flip side of you: I spent 17 years in DC and now live in SoCal. Although I don't follow celebrities' personal lives, I think the observation in your second paragraph that in SoCal, many people wear costumes, as opposed to East Coasters who "dress up," is dead on.

I know quite a few folks who literally dress in costume all the time, especially women who dress in fetish gear (yup, in public), vintage, and pin up styles. I'm talking very thorough and detailed, including hair, eyeglasses, jewelry, tattoos, etc. Once I ran into a male colleague at lunch who was wearing a Batman cape, for no reason. These are generally very artsy people and some are professional performers, although most of them have traditional day jobs. I really like this because, as I believe about Halloween costumes, I think the outside matches what's inside. Why do that only one day a year?

The only thing I can say about the celebs in question is that, as my friend said recently, when someone portrays himself as an "outlaw" and a rule-breaking rebel in virtually every other way on the outside, then it's probably best to assume he or she really is that way on the inside, and, for prospective significant others, "when you lie down with dogs, you get fleas."

I strayed into a WalMart recently for cheap tee shirts, only to stumble upon the West Coast Chopper line of attire.