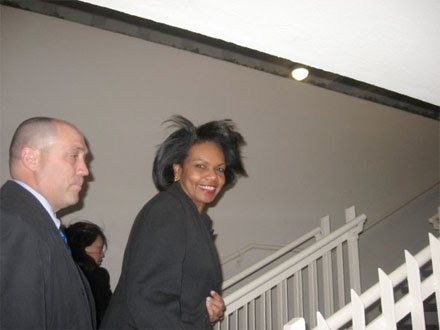 (via Huffington Post)
Condi lives and operates within a fairly exclusive, chic bubble. Think of all the pictures of her that this blog has featured, and think of how many of them show her, you know, just walking around amongst ordinary mortals. Hardly any, right?

But the other day, what began as a regular trip to the Watergate's beauty salon ended up being an uncomfortable confrontation with somebody less-than-enthusiastic about La Rice's performance on that Middle Eastern thingy. And unfortunately for Condi, this salon client had an upload account with the Huffington Thing. Let's listen in:

Recognizing how rare it is to get face-time with the nation's top diplomat, Nadia felt she had to say something, anything. "Great job you're doing in Gaza," she blurted out. Nadia says Rice then turned to her and smiled. "Ohh thank youu," she responded, dramatically dragging out each word. "I don't think she understood the sarcasm," Nadia told me. "No. I mean is there anything else that the U.S. can say other than all of the onus is on Hamas to end the violence?" she asked Rice.

"We've made other statements!" Rice replied, as she walked away. "And it is," she added, referring to the notion that solving the crisis is solely in the hands of Hamas.

After her exchange with Rice, Nadia called her friend, Kevin, who suggested they wait outside the now-closed salon to approach the Secretary of State about Gaza once again.

"I pay taxes, so I feel responsible for what's going on," Kevin, who works as a consultant, told me, alluding to the fact that Israel receives the most U.S. foreign aid of any country.

When Rice emerged, the duo calmly asked her to reconsider her stance on Gaza. "We told her that right now she really has the power to do something," Nadia said "and that we know that deep down she doesn't even believe in what she's doing."

Awkward! So at this point they knew they had lost Condi's attention, but the plucky citizen inquisitors had one final card up their sleeves:

Rice ignored their comments, walking at a steady pace with her entourage in tow, before Nadia asked a final question.

"I said, 'Fine if you won't say anything, how about you pose for a picture?,' Nadia recalled. "At that point, she turned, paused and gave us the most chilling smile."

And that's the photo you see above! And that leaves one final question: if that's how Condi looked AFTER visiting the Watergate salon, what, exactly, were they doing to her in there?
Posted by Peteykins at Tuesday, January 13, 2009

It burns! Her eyes have a certain "Bride of Chucky" look to them that is so awful, I am loathe to even mention it.

This is a bit much for me so early in the day.

That said, I think that the next SoS will provide us with a lot of opportunities of this nature.

All I can say is that this photo is a karmic gift to this blog as the waning embers of Condi's 'do-and-the-era-it-spawned slowly extinguish.

"The eye is the window of the soul; the intellect and will are seen in it. The animals look for man's intentions right into his eyes. Even a rat, when you hunt and bring him to bay, looks you in the eye"
-HIRAM POWERS (1805-83) American sculptor.

What fun, though... they gave her quite a 'do at the Watergate salon, did they not?? Now, a little gel should hold it just so.

Maybe this is her hair flipping about when she turns her head, in that cute 'n' sassy way that Cameron Diaz showed in slow motion in the first Charlie's Angels, and the picture caught it in mid-flip.

Even still, needs work on the cute 'n' sassy.

Poor Nadia and Kevin better have their souls checked--I believe they might've been burned crispy by that look from the Bride of Beelzebub.

Speaking of "burned crispy," that hair is just... just NO.

I for one have the utmost sympathy with Condi and the plight of her coiffure. I am currently letting my hair grow out from shaved to ponytail, and I'm at the point after 4 months that it's long and curly enough that it just does what it wants. With the strangely warm, dry winds we have in NorCal this week, my hair is presently pointing in every direction all at once.

And that leaves one final question: if that's how Condi looked AFTER visiting the Watergate salon, what, exactly, were they doing to her in there?

I shouted a very undignified, "OH SNAP!" when I read this at work. I'm sure someone heard me, but any humiliation was worth it.

Is Condi leaving Washington after January 19? If so, maybe her hairdresser decided to have one last little bit of fun. After all, they'll never see her in there again. Or maybe she didn't leave a tip.

That hair screams "There's Something About Condi!"