India is Burning, but OMG, Look! Condi Got to Meet the Queen!! 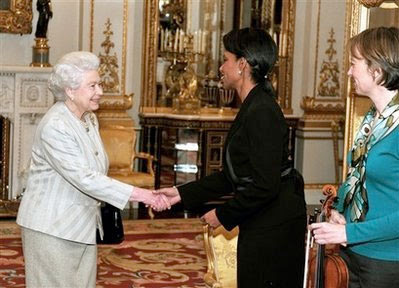 As a special bonus, it looks like the Royal Person was totally dusted with flour for the occasion. So fancy! Don't sneeze, Condi! And I guess it was some sort of theme night because Condi's wearing... a bathrobe? I don't understand royal protocol. I'll note with approval, however, Louise Miliband's Ursula-inspired, maxi-patterned scarf.

But look, this is all Dr. Ferragamo is supposed to be doing right now, meeting with glamorous, important people who will wish her well and (hint, hint) maybe give her presents. I mean, so what if there was an explosion in, what, Asia or something? Please, you don't really want Condi in charge of that, do you?

And that's why it totally sucks and is so fully unfair that Bush pulled Condi off her fun Eurobye-bye tour and made her go deal with it. Duh, like Condi knows anything about terrorism! You'd think George would have figured that out by now.

But there was better Condinews today, and that is that she told reporters in London that she won't be giving Hillary advice on how to be SoS, so that's totally a relief. And then David Miliband said the funniest, funniest thing! Totally while keeping a straight face, he looked at Condi and said, "You'll be a very hard act to follow."

OMG, so absolutely true!
Posted by Peteykins at Monday, December 01, 2008

Well, maybe. Have you ever taken a serious look at Hillary's shoes?

Maybe she can make a diplo-pouch statement... or not.

So my first thought was "who is that stupid flunky holding a violin and not properly dressed for the queen?" but then I realized it was Miliband's wife (he's so dreamy). Then I was like "what on earth is Her Majesty wearing?" But then I paid closer attention to Condi's couture, and realized that this meeting took place on Her Majesty's Magical Island of Misfit Clothes.

So question, is that a coloured elastic in Condi's hair? And if so, what the WHAT?

Dusted with flour? HAHAHAHA!
Why are we paying that lame duck bitch to flit all over the world to play Chopsticks for people?
Just the jet fuel alone is a gross misappropriation of taxpayer money.
Bring her home, lock her in her office and put a bag over her head for the next 50 days.
Once she's out of office she can go on the road with Kenny G.

I loved this part of the article:

"The Queen listened to part of the performance, and afterward presented Miss Rice with an audio recording of the recital as a gift."

And, what a unique, royal gift...a recording of Condi's performance so that she can listen to how awful she really plays the piano.

Nothing says solidarity with the Indian people like an audience with The Queen.

Lulu hit it on the head--let those Indians burn, as long as the British Raj is on schedule for 4 o'clock tea time!

Nice to know that even in the waning days, Condi is still as ineffectual and misguided as ever.

Hey, you need to actually link in the video of the event:

That way all the Sparkle-readers can see how the Royal Person commands her dog, and how Condi really plays the piano.

Yes, but was she wearing her sensible Ferragamos, or her new stepping out Manolos? That is really the only question I have about this boring event.

Is not Her Maj the Whitest Person in the World? Seriously, she looks like she's been feasted on by a pack of vampires and drained dry. Take an iron supplement, Liz! Jeez.

Say what you will, people, but Hillary will not be playing the piano for QEII.

I do dread the pantsuits, though.