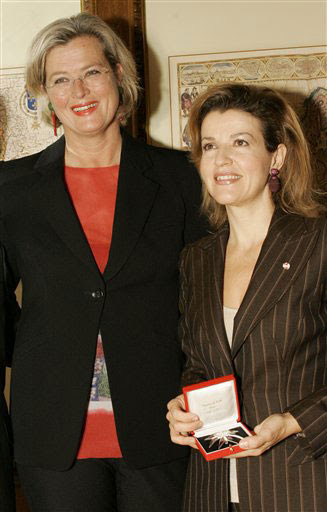 I have a sneaky feeling that certain Pony Pals will be thrilled to see that the affable diplomatic giantess' last formal act involved giving a piece of fancy jewelry to a beautiful woman. On the other hand, this is the kind of cutesy photo-op that seems more... Condiesque than we're used to seeing from no-nonsense Ursula.

But now we won't even be getting those! And here's where the bargaining comes in: Attention, please, Ursula staffers! Yes, you! I know for a fact that at least one of you reads this blog, and even Ursula herself has apparently viewed the Pink Pony at your urging (the thought makes me dizzy). I'm begging you: don't let Ursulaproduct pass us by! Now that's she's going to be a normal member of the Austrian parliament, so won't be showing up on the Reuters and AP feeds nearly as often, so it'll be up to you guys to snap as many pictures of your beloved boss as you can to fill the gap! The Pink Pony NEEDS Ursula! Don't let her fade away! Try taking sneaky pictures with your cell phones! It's up to you, Ursula staffers! I'LL PAY YOU!! OMG.
Posted by Peteykins at Monday, December 01, 2008

Please immigrate to America and run for office.
It worked for your fellow Austrian
Schwartzenegger and he's a fucking muscle-brained idiot!

Rumors in some Austrian newspapers say that Ms Plassnik will become Austrian ambassador to the U.S. of A.
So if you Americans are lucky, you will see her more often than we Austrians do in the future.

Felix, you really can't imagine how happy that rumor makes me.

The PP is looking for a rental near the Austrian embassy!!

OMG that would be totally fab to have Ursula hanging out in America.
I bet she'd happily attend the HRC victory party in DC.

Ursula baby, open up that blazer and let me see what design lurks upon your sweater...

Take a deep breath, Princess! It's okay! Ursula can never fade away, not as long as you comb those feeds for whatever Ursula-crumbs are there!

P.S.-Fran's comment made me a little hot and bothered!

I think Felix is a big PSP tease.

Felix, you tease us all.

My heart is aflutter. Does my hair look okay? OMG, I have to brush my teeth! Again!
OMG! WHERE'S MY STEPSTOOL???

Felix isn't teasing. I've heard the rumor, too... And from very good sources!

Well, there is some truth to the rumors. Ewa Novotny (Austrian ambassador to the US) retired this summer and since then the post is vacant.
There were first rumors that State-Secretary Winkler gets the post, but then Ursula resigned and all of a sudden, those rumors started- so maybe we'll soon be able to see Urula here: http://www.daylife.com/photo/09W46a482g9kI

Just read following Austrian articles
- and even if you don't speak a single word in german: 2 words are important: PLASSNIK + WASHINGTON
;-)

I'd also like to point out that the former Ambassador, Eva Nowotny, was a giantess herself. So Plassnik would fit in just perfectly!