How to Make Morgan Freeman Uncomfortable 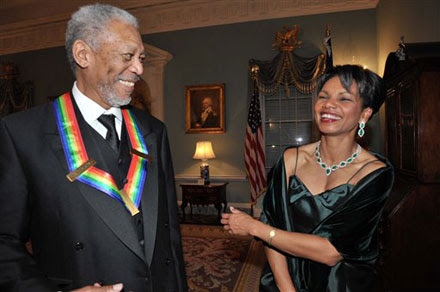 What, Kennedy Center Honors again? Already? Well, it was the last time for Condi to perform her favorite gig, and it looks like she's wearing about $10 zillion in Harry Winston emeralds and diamonds for the occasion, in addition to a special coneheaded updo and a truly fabulous gown. Looking good! Other honorees included the surviving 1/2 of The Who, George Jones, Barbra Streisand (!) and Twyla Tharp. And Condi made a funny joke based on one of Freeman's worst movies:

The awards were presented Saturday night at a State Department dinner hosted by Secretary of State Condoleezza Rice. She addressed each honoree, beginning with Freeman, who once played the president in the movie "Deep Impact."

"I know that when you played the African-American president of the United States, most people thought that would happen when a comet hit," Rice said, drawing laughs and cheers. "But wonder of wonders, fiction has become true."

Does anybody still think Condi voted for McCain?
Posted by Peteykins at Monday, December 08, 2008

She told the joke badly, and she stole it from Jon Stewart and/or Chris Rock and/or D.L. Hughley. There are a lot of jokes about what a serious crap storm rains down on black presidents in the movies and on TV, and not just Deep Impact.

I do not think she voted for McCain, but hey that's just me.

She could do a lot to rehab her horrible image if she uhh...came out and said she voted for Obama.

Underneath the "we're both so amused" surface, I see Condi looking awkward as ever and Morgan Freeman kinda has an "are you for real?" glint in his eye.

Isn't he getting divorced? And isn't she Washington's most eligible bachelorette?

Morgan and Condi-match made in heaven?

OK, I am confused about the cleavage situation. Am I incorrect, or are her breast really awkwardly misaligned? Perhaps the reason for Morgan's sketchy look? Laugh all you want, Condi, but reconstructive surgery isn't cheap.

Anonymous - she HAS no breasts. No body fat anywhere. I think Randy likes it that way.
Yes, and Morgan does seem a wee bit uncomfortable like" what the fuck is up with you, girl"

I smell a sequel here- Miss Dizzy Driving Me Daffy .

I love how Condi is crossing her arms to squeeze and lift her tiny boobies. She's learning technique from Playboy in her off time.

He is definitely smiling the smile of a man who's trapped in an awkward hellish situation.

Condi must be on a high.... she's probably got a Bush countdown clock that has deep meaning for her.

Pretty soon she too can cut loose from DC & all this crapola.

Crapola for which she was so responsible -- and for which she, a war criminal like her boss, will never be tried.

Now I know why.

Condi looks gorgeous as usual. Morgan Freeman _does not_ look embarassed, he looks as if he is enjoying the hubba-hubba company of a hot intelligent babe. And who the he** could imagine Condi's dress is green? Looks just like regular black to me.
But what the hell is that around Freeman's neck? it looks like someone draped Mork from Ork's suspenders around his neck. Ugh.

That is totally a green dress... dark dark green.

I've been trying to analyze what makes Condo look so awkward in the pic. Her face looks like she is actually smiling and having a good time. I think its the combination of her shoulders rounded and slightly forward of the rest of her chest with the protective arm covering her privates (probably holding that expensive clutch). It makes her look like she is trying to hide within herself, ashamed that she is enjoying herself.

Shoulders back girlfriend, carry yourself with pride.

No way Condi voted for old man McCain over the "Superman" of her fantasies:
http://democralypsenow.blogspot.com/

It is worth menioning that Morgan is far more interesting than Condi in every respect. From the car crash which led to his pending divorce to his wonderful taste in sailboats.
http://www.shannonyachts.com/sail43_46.html

A man of uncommon grace. He even joked as he was being cut from the wreckage of a serious car accident a few months ago.

So . . . what's he doing in the company of these shitwads?

She looked fabulous, and has looked a lot better since the election.

After being passed over by McCain and the fuckwits at the RNC for Vice-President for Miss Congeniality? No. I'm sure she voted for Obama. The McCain people trashed her in the Weekly Standard all year because they were high on Tim Pawlenty, and Bill Kristol's mag catered to the Attack Iran Now crowd that a lot of McCain's base catered to.

Not even Condi could have helped McCain. That was a campaign run by stupid people. Ask Roger Stone, the old Nixon/Reagan operative.

When McCain needed a woman, he had a choice between Condi and Sarah Palin. Guess who he chose? Sparklepony was clueless as to how close McCain was to actually picking Rice-he was too far behind and was actually ready to disregard the gay stuff. However, Mitt Romney's people (the same folks who engineered the Prop 8 push) on the RNC pitched a fit because they saw Condi as a long term threat to the Store Mannequin. And Romney's people are the money people.

In the end, they ended up in a worse position with Palin, who doesn't get independents like Rice could but beats Romney like a drum with the Base. Poetic justice: Mitt's dead as a doornail, Palin's a star, and Condi gets to go get a great job with the NFL.

Things have a way of working out.

What's with all the Condi cheerleading on this blog and other blogs in blogosphere. I like Condi, too, but let's not forget she was a willing enabler in BushCo's global mess, despite her intelligence. I don't think she should get a pass. I agree with Condi: "it is time for new blood." People, let her go. Trust me, she is ready to move on to the next phase of her life.

Wait, fiction came true? A comet hit? I don't get the joke.

You.... uuuuh... you're new to this blog aren't you? Go back through some historical posts, you will see that the pink pony is only a fan of two women in politics - Ursula and Cindy.

I wonder if I will ever accept that Ursula is gone...