Programming Note: This Week, the Part of the Golden Calf Will be Played by Three Sport Utility Vehicles 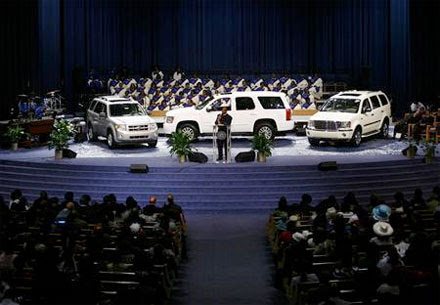 Bishop Charles Ellis prays for the future of the American auto industry during a special service called "A Hybrid Hope" at the Greater Grace Temple in Detroit, Michigan December 7, 2008. REUTERS/Carlos Barria

Seldom have I seen religion, commerce, and politics combined in such a peculiar way:

At one point, Ellis summoned up hundreds of auto workers and retirees in the congregation to come forward toward the vehicles on the altar to be anointed with oil.

Let that phrase sink in while enjoying the rest of the photos: anointed with oil. 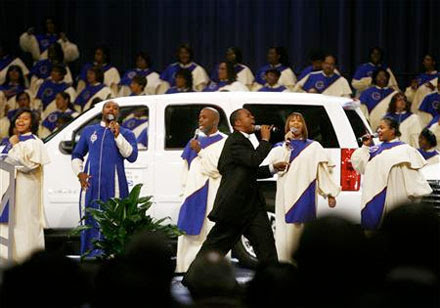 Local car dealerships donated three hybrid SUVs to be displayed during the service, one from each of the Big Three. A Ford Escape, Chevy Tahoe from GM and a Chrysler Aspen were parked just in front of the choir and behind the pulpit. 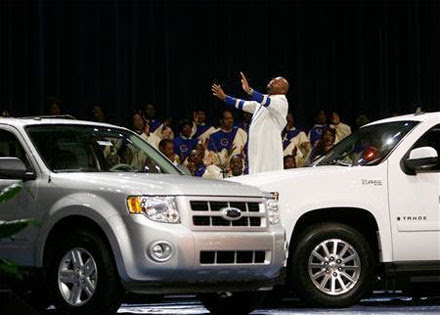 Representing the 150,000 unionized workers at GM, Chrysler and Ford Motor Co, UAW Vice President General Holiefield said the industry had made its case for emergency funding as strongly as it could.

"We have done all we can do in this union, so I'm going to turn it over to the Lord," Holiefield told the congregation.

Brings a whole new meaning to the term "Voodoo Economics," doesn't it?
Posted by Peteykins at Monday, December 08, 2008

As for me - I am nutty. Maybe. OK, yes. Christian - you know that I am. Irreverent- without a doubt. What other kind of Christian should there be?

That said, this makes my skin freaking crawl. I am duly horrified.

Paging Sarah Palin, come get annointed with the SUV crowd, it ought to help you falling Alaskan oil revenues.

Lulu -- this is a heavy-duty situation, calling for high viscosity. I would sugggest the 25W70, without a doubt.

Why aren't they blessing like, I dunno, Chevy Cobalts or Ford Focuses or something? Like the few American cars with passable more efficient MPGs? Or perhaps a prototype Volt?

But oil-anointing? The Popemobile is a Mercedes!

I'm glad they learned their lesson about the dangers of putting all one's eggs in the SUV basket.

I'm from Detroit and I have been praying for a bail-out because I don't have the money to take care of my 55-year-old, blind, retired autoworker dad, but never in ten million years did it cross my mind to anoint a Chevy Cobalt with oil while I prayed. Of course, Greater Grace Temple has always been a pretty interesting place. I'd guess their entire contribution would be affected by the collapse of the Big Three. It's still odd. Even for them.

I think that may be the best post title ever.

The logistics of praying for Zimbabwe was just too daunting.

We shall call it, Baal!

Didn't God say something about not having false gods before him.

Aside from the nuttyness of this, Detroit just doesn't get it. Instead of choosing truly fuel efficient vehicles to pray over, they choose hybrids that even a Honda Accord puts to shame. The Chrysler Aspen, "even after hybridization ... will barely break the 20-mpg mark—a fraction of what the average Prius driver achieves." (hybridcars.com/suvs-minivans/chrysler-aspen-hybrid.html)

These are the same people FOR capital punishment even though their savior was wrongly executed.

I see no difference, with Sarah Palin leading prayers for a new oil pipeline at her church. (With the building costs payed for by the lower 48 States, of course)

Some already did Baal for moolah, that one was taken

This is creepy. Not only for the bizarre tie-in to religion, but for the implication that THESE are the "fuel-efficient" cars that will save Detroit's ass. The Chevy Tahoe Hybrid "boasts" 22MPG, and Chrysler Aspen expects to get 19MPG. That's not fuel economy, folks!! That's more of the same.

Jesus was a punk bitch hippy,he rode around in a fuckin VW bus with other rotten ass hippy's =oh and that prostitute Mary he rolled with-Plus jesus hated black people...get your shit together man.

that oil that he used should have been KY Jelly... Somebody is getting REAMED...

WOW! Just WOW! I knew Satanism was alive and well but I had no idea what-so-ever that it was to this extent.

It doesn't surprise me those vehicles are on display. Every black person around my block owns an SUV.

Before you jump on me, I'm black, who drives a hybrid I built myself that runs on gas and hydrogen. It is possible.

The big 3 are just dragging their feet in producing these vehicles.

Oops! Below the link is fixed. Don't know what happened.

If the link above doesn't work, Google Search hydrogen power engine canada for the article on Ford's site about their hydrogen vehicles.

Why didn't the invite reps from each of the unions to be blessed?

It's the people that are in need of God's help not the cars.

i am the founder [c.1983] and spiritual leader of "the orphanage," a home for wayward bicycle racers here in central iowa.

for years, bicycles have played and been displayed prominently in our worship services, and are parked all around the sanctuary and alcoves of our humble home.

typically, however, we annoint our visual aids with phil wood grease or campagnolo lubrificante grasso.