"Lookit!" Says Condi, "We've Got a Charismatic Black Man, Too!" 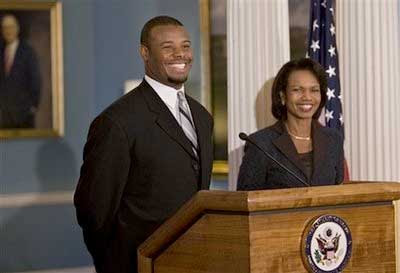 This is, of course, the latest in Condi's "send a bunch of celebrities around" strategy for world peace. Why are they all sports stars? (EDIT: OMG, I just remembered that she also deployed Fran Drescher, so never mind.) Because, Pony Pals, that is the depth of Condi's imagination. I surprised she hasn't sent Neiman Marcus' shoe sales staff to North Korea yet!

I'm not familiar with this Griffey guy. He's very handsome! Am I supposed to think that? Is that OK? I believe Condi's thinking the same thing:

I know that he said he’s going to make his first trip to Panama in January, and I look forward to that. I’m going to Panama and – in just about two weeks here, three weeks here, and I’ll be able to tell them that Ken Griffey, Jr. isn’t going to be far behind.

"Never mind about our embarrassing administration," she'll tell the Panamanians, "We're sending a baseball star and he'll totally sign all your stuff!"

She also met with "Druze leader Walid Jumblatt" today, and that is just so, so, totally obviously a made-up name. Is that one of the Harry Potter characters?
Posted by Peteykins at Tuesday, November 18, 2008

Oh, Junior. I though ditching the Reds for the White Sox was bad... who knew you could sink even lower?

Ken, you are and will always be one talk hunk of scrumdiddlyumptiousness in my eyes, but latching on to the dying days of a criminal administration does not have good implications for you when the International Criminal Court comes to call for witnesses when Condilove is indicted.

PSP: I can tell you've never shopped for shoes at Neiman Marcus. The men (and it is almost entirely young, beautifully dressed men -- hmmm, maybe you should visit after all) who labor in the shoe department at NM are among the most adept and experienced diplomats in the world. Convincing fat, middle-aged women (that would be moi) that they actually look "hot" in the latest 5-inch high Ferragamos, and making us believe it, and not breaking into guffaws -- that, my dear, is the kind of talent that our State Department can always use.

Um, I thought Condi preferred women? Wasn't she living openly with Randy Bean when she was at Stanford?

Lady Wesley, if you think I've never shopped for shoes at Neiman Marcus, then you obviously haven't been reading this blog for long.

Princess! You are not familiar with Ken Griffey, JR? Oh, how much you have missed. He is athleticism and ballet combined. Unfortunately prone to injury his earlier baseball career was one unbelievable moves and catches and hits one after another.
I'm not sure he has accepted the post as a right winger but as a method for the United States to accept African Americans as more than athletes, soul singers, rappers and hip hop artists. If he can expand this country's vision of leaders it will all be worth having to be seen next to Condi.

And Michelle Kwan! Don't forget - she's an Ambo too! You can only imagine how much resonance she's had with Middle Eastern audiences!

And that Fran Drescher - what says "spreading American culture" more than the nasal star of a middlingly successful mid-90s sitcom! Forget the elitist, pandering days when people like Dizzy Gillespie, Marilyn Horne, and Gene Kelly traveled for the State Department - Condi's got Fran! and Michelle! And Cal Ripken, Jr.!

Okay, this calls into question Condi's understanding of non-American cultures. Has she not noticed that American sports such as baseball and football are not widely played, watched or followed outside the US? I doubt many diplomats have ever heard of Ken Griffey Jr, or Fran Drescher for that matter. How, then, can they be good choices for diplomatic fluff jobs, if their only positives (face/name recognition) don't actually apply? Lame!

When I look at this picture, I think that the Brits are right in having bad teeth ... meanwhile, never mind that most of the world doesn't play baseball.

Actually, Walid Jumblatt does exist. Tsk, tsk sparkle pony! You mean you don't have the budget to hire a fact checker? More likely I'm simply overlooking the joke you're making about his name. Careful, the PC police will be after you for daring to poke fun at a name. Those dang fer'ners shoor do have some strange names!

Panamanians everywhere are on the edge of their collective seat, awaiting the arrival of these irrelevant people.

If it's the Walid I'm thinking about, he actually LOOKS like a Harry Potter character. He's got this bizarre, bug-eyed look going.

But for what, exactly?

You mean you don't have the budget to hire a fact checker?

Budget? Are you high? Or retarded?

Plus, if you don't think that name is funny, then you simply don't have a sense of humor.