Marilyn Musgrave is On Some Wild Bender Somewhere, but Nobody Knows Where 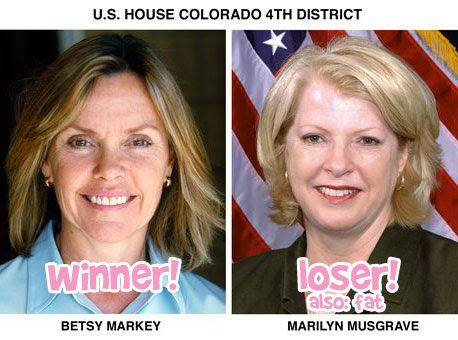 One of the bestest results from those recent election thingies was that hateful slob Marilyn Musgrave got kicked to the curb, losing to a rich lady who looks an awful lot like Amy Sedaris (regular Amy, not Jerri Blank Amy). Since then, she's earned the title of sorest loser of them all. Yay! Rolling around in the gutter somewhere, she has not acknowledged the fact that she is a loser, loser, loser:

Two weeks after the brutal loss, Musgrave still hasn’t called her opponent to concede or to congratulate the victor, as is not only textbook but also mannerly to do.

Moreover, Musgrave’s ill manners bleed into her own team. Rumor has it she still — 14 days later — hasn’t even thanked her campaign staff. (Again, textbook.)

Musgrave press secretary Joseph Brettell tells us: “It’s a campaign matter, and I have no further comment.”

And as for [winner Betsy] Markey, her campaign manger, Anne Caprara, who is in town this week with her boss for orientation, tells us of Musgrave: “No, she hasn’t called to concede, but we’re moving forward.”

Though the Markey team doesn’t plan on stopping by Musgrave’s office while in town, eventually the two camps will have to touch base — just in terms of transitioning. But curiously, more rumors abound that no one has seen or talked to Musgrave since the brutal loss; she’s all but disappeared.

So good! It couldn't happen to a nastier, more horrible cow. I hope she's miserable. Good riddance.
Posted by Peteykins at Tuesday, November 18, 2008

This, from the political party that coined the play on words "Sore Loserman."

Musgrave deserves ground glass in her food for trying to enshrine discrimination into the federal constitution.

That first narcissistic injury to one's overinflated ego is the worst. If Musgrave can integrate the loss with her own inflated view of herself and her belief system and can break through her black and white view of the world to embrace the reality of gray then she will be on her way to a whole new world of discovery. If she cannot, she will be bitterly licking her wounds and yelling at clouds the rest of her life.

Lurves me some Amy Sedaris.

Perhaps they'll find her wandering the streets of some Colorado burg, bottle of Old Crow in hand, singing, "My Way."

She's hiding under her DC desk.