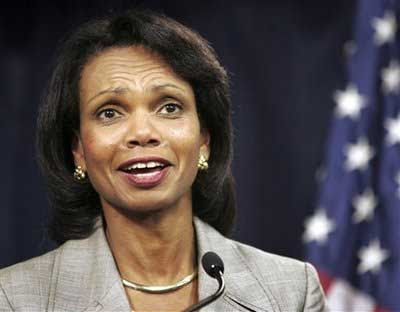 What's all this about agreeing on timetables? Is this the new thing now? Does George know about this?

Anyway, who could have guessed that Dr. Ferragamo, after her stops in France, Georgia and Poland, would make a OMG SURPRISE visit to Iraq? Well, I mean, other than me and everybody who reads this blog. PEEKABOO! But this is kinda cute: the Iraqis are so totally democratic now that they, too, can protest against Condi: 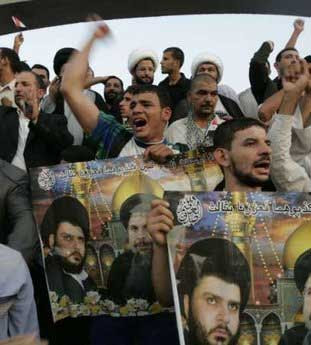 (AFP)
They whipped up that little protest against Condi with totally no warning! What spunk!

Anyway, back to Condi. My first thought when I heard about our Princess Diplobot's OMG SURPRISE visit was yes, yes, I know she'll be safe in the Green Zone. But will there be an adequate supply of facial tissues? Weren't you worried, too? Well, rest easy: 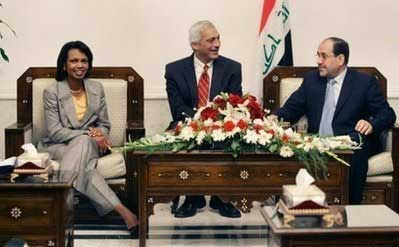 Also, ha ha! That Poland deal yesterday? I was totally all, like, thinking Condi was taunting the Russkies, her old arch enemies who made her famous. But it turns out I was wrong! It turns out all the missiles they're going to put in Poland are to protect Poland from... North Korea and Iran:

Secretary of State Condoleezza Rice and her Polish counterpart agreed to place 10 missile defense interceptors in Poland to defend against threats from Iran and North Korea, not to weaken Russia, the secretary said.

“This is an agreement that, of course, will establish a missile defense site here in Poland, a missile defense site that will help us to deal with the new threat to the 21st century of long-range missile threats from countries like Iran or from North Korea,” Rice said yesterday at the Polish presidential palace in Warsaw.

See, it has nothing to do with Russia! So now do you understand how totally nice it was for us to give them those missiles? Now our friends in Poland don't have to worry about being constantly badgered by Iran and North Korea. Phew!
Posted by Peteykins at Thursday, August 21, 2008

Oh, and now the fastest way to the U.S.A from North Korea is over Poland? Neat! Boy, that's one strategic country, I tell you!

Protect Poland from Iran & N. Korea?
You have to be either a Republican or a member of our elite media to buy that creative lie.
Remember, Putin is ex(?) KGB.
He's not buying.

She looks so radiant in these! Clearly she's relieved to be working even less than ever. And how nice of her to get started on that troop withdrawal for President Obama.

Just how well-fortified is that Green Zone? I mean, I notice that she never takes the pearls when she's on one of her UltraSecret Secret Missions - just that stupid torque-thing.

"Dr" Rice, who knows practically nothing about Russia, justifies her official position (if not her existence) by considering herself, at heart, an "arms 'control'" specialist.

Hence her great legacy is ... installing American missiles near the Russian border. So Condi must be pleased to "win" the military contest with the Russians, which reasonable persons thought was over in the past century.

This minor figure in American diplomatic history -- the current Secretary of State -- who doubtless told Bush to look into Putin's soul (as if a KGB agent, like "Dr" Rice herself, actually had one) will be remembered for re-igniting the Cold War.

Thank you, "Doctor," for making the world such a safe & wonderful place.

Why does the matching armchairs photo look like they're at a wake for Vern Troyer?

That top photo is subtitled, "O sole Dior!" as sung by La Geo-Condi.

What's with the casket spray on the coffee table?

Serious! Not only is the heaping mound of flowers way overdone, but where's the American flag behind Condi? The symmetry in this one is abysmal.