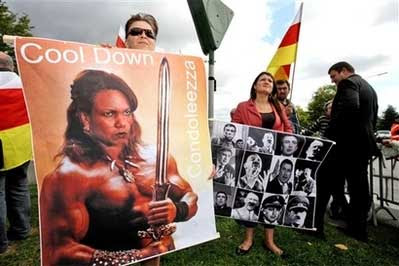 Ossetian protesters demonstrate outside NATO headquarters in Brussels, Tuesday Aug. 19, 2008. U.S. Secretary of State Condoleezza Rice and her NATO counterparts are reviewing relations with Moscow and are expected to curtail high level meetings and military cooperation with Russia if it does not abandon crucial positions across Georgia. (AP Photo/Geert Vanden Wijngaert)

Wow, gender-fucktastic! I'm wavering between feeling very sick and frightened and being totally, all, you know, I wish I had thought of that! And while extreme, I guess this approach is a little more direct than, say, a nice picture of Condi knitting by the fire with a caption saying, you know, Don't get up, hon, we'll handle it. But, OMG, at least that one won't haunt my dreams!
Posted by Peteykins at Tuesday, August 19, 2008

And look at that mullet! Hairdo Alert: super-severe!