Diplobots Just Want to Have Fun 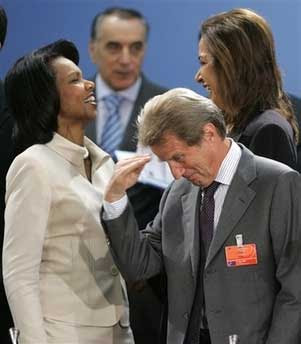 I don't know about that AP caption, but I don't think it's accurate. I believe Mr. Kouchner is gesticulating wildly to distract from the lesbian melodrama playing out just behind him as Condi approaches the handsome Dora for an intimate moment. 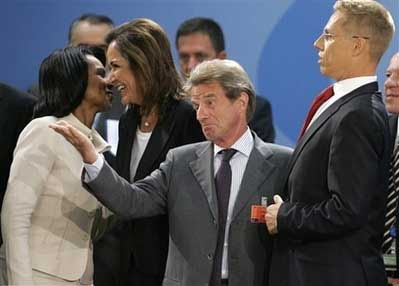 We don't have the moment of actual mouth-to-mouth contact captured on film, much less any tongue action, so we'll just have to go by the reaction shot as delightful Dora moves on to her next conquest: 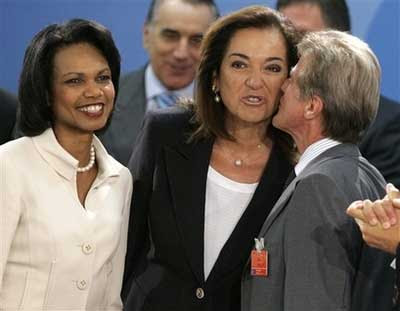 Whoa! Glad that's over! Back to diplomacy, you crazy kids!
Posted by Peteykins at Tuesday, August 19, 2008

Tongues passed lips. I can sense this.

Look at Condi's eyes shine & that addled grin. I can almost see the stars swirling around her head. She sure liked that kiss!

But what they're doing isdiplomacy! And Condi is so good at it, cuzz it means doing nothing but showing her huge front teeth and playing air kiss games!

This is almost enough to make me give up women. Ick.

Wheeeeee!!! Condi havin' a little fun. Hope Karen at home doesn't get a peek at these pics. There will be trouble in paradise.

Oh my, I was reading this post in a very small window, scrolling line by line, and I almost jumped on my seat when I saw the second photo! Thank you, PSP :)

If there was no Ursula Plassnik, I'd probably have a Dora thing going on, six foot tall wonder from the land of the amazons and Isle of Lesbos that she is.

That's the happiest smile I've seen from Condi in quite a while, and honestly, who can blame her?

Are you sure he wasn't saluting Secretary Gates?

Looks like the Condibot got a few extra volts from somewhere.

Did you see this image from today's BBC post of Day in Pictures?

It is all Greek to me!