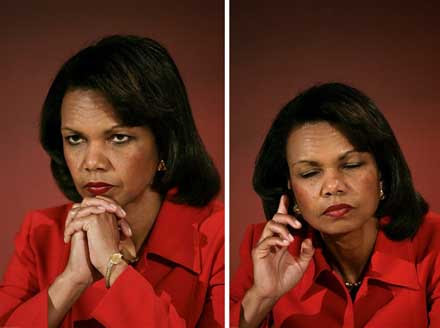 Oh, she's "listening," eh? OMG, Condi has been SO boring lately. I'm afraid that and some ill-timed interweb outages prevented me from creating my usual Monday Condi Roundup for Wonkette, but it's probably just as well; I would have had to put antlers on ALL the pictures to make it funny. The Roundup will return next week!

So what will Madame Secretary accomplish this week? OK, that's a bad way to phrase it. What will she do this week? Because, Honey, I don't think you're accomplishing anything at all until you're "back at Stanford."
Posted by Peteykins at Monday, May 05, 2008

Oh honey- do not be so cru-el! She is like OMG so tired, all that jetting around and pretend diplomacy 'n stuff.

I mean like, for real - the girl is plum tuckered o-u-t!

Frankly, I am wondering if in the "sleep" photo, she is really channeling some force of evil or something. It goes with the red outfit and her demeanor.

At least as I see it.

how about "accomplishing anything at all until you're sitting in a cell at The Hague?"...

So what's Ursula up to?

Her face has that "Ugh I'd rather be shoe shopping" look.

You perceptively note a concept for which the English language has no word, so I submit an American alternative to lecondel: accondishments. When you never accomplish anything, your weekly summary of what you've done all week is just a bunch of accondishments--how you've filled the days.

(Sadly, PSP only ranks #25 when googling 'lecondel', but the Wonkette CondiRoundup scores #2!)

What a fun game! You could do one for the whole administration:

Cheney's War Profiteering Strategy: Pray, Shoot Someone in the Face

The lolz caption for the picture on the right:

Her life has been one big accondishment, except when she is doing some purposeful shoe shopping. Hmmm, I wonder if they will have a Ferragammo shop or a Manolo shop in the glitzy new mall in the Green Zone. Can't wait to find out.

As a Krisschun, I find that first picture incredibly inspiring. May I propose that it be mass-produced, to be framed and hung in living-rooms the land over?

But we can always hope.

Middle East peace Quartet? If musicians are trying to negotiate peace agreements, why wasn't poor Condi invited to perform with them?

She is not sleeping.
She's obviously listening to Smokey Robinson on her iPod:

"I love it when we're cruise missling together..."