Burning Up for Their Serbian Love 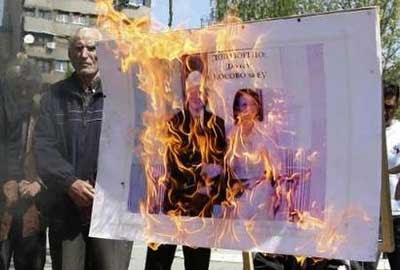 People burn a poster of Serbian President Boris Tadic and U.S. Secretary of State Condoleezza Rice (R) during a protest in the northern Kosovo flashpoint town of Mitrovica May 1, 2008. The words on the poster read "I gave Kosovo to the EU".
REUTERS/Nebojsa Markovic (KOSOVO)

They're hot 4 Condi! They used a shot of Dr. Ferragamo and Tadic from a photo-op in September, 2006, so enough with holding the grudges, OK? Sheesh!

Any way, can you believe that as diligently as I try to keep up with Condi's mad escapades, it's still possible to fall a little behind? So here's she is yesterday working the matching armchairs with a hot Lebanese lady: 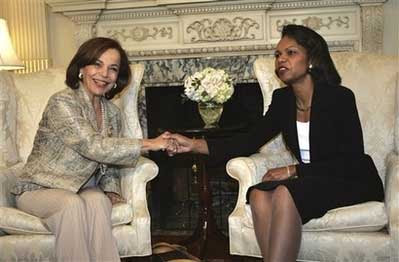 Also, how could I have missed this exquisite shot from Tuesday, a sensitive portrait of a person whose outer glamor utterly reflects every last bit of goodness within: 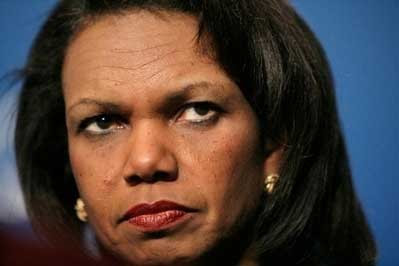 AFP/Getty Images
Posted by Peteykins at Thursday, May 01, 2008

She's wearing a decidedly visionary look in that last shot - the vision being of her assessment by history. No wonder she isn't smiling.

The true face of "Dr" Rice, just as the photo, on a previous PSP posting, of the maimed veterans' parade (with her and Dubya smiling away) is the most accurate representation of the criminal Bush regime.

That expression is the very definition of the word "clenched."

I didn't think muscles could do that, and I can't even begin to contemplate the extent of the scar tissue that must exist on the inside of her lower lip from being bitten.

"She was always moving forward as if, like a shark, she would die if she stopped."

anonymous: oh my, oh my! condi the shark! perfecto!

From the looks of that photo, it looks like Lebanon sent the automatronic Moawad-bot.

Looks like someone farted in Condi's general direction. Must've been her husband I mean her president.

Klingon Condi wonders... where did I leave my batlef?

'Cos I'm sad and whoever is talking is stupid and slicing him in half sure would be a nice pick-me-up.

Condi: "I like the Italian marble fireplace, but your chairs are not rich corinthian leather, what's up with that?"

Moawad: "Shut up and smile for the photo op, bitch"

Someone should tell Condi not to scowl that because her face could get stuck.