Surprise Trip to Iraq? Probably Not for the Florists 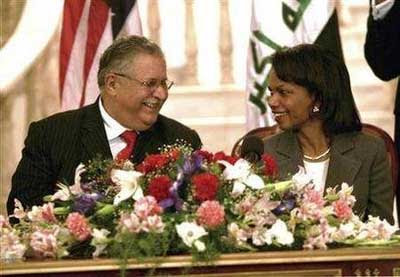 Yay, another OMG SURPRISE trip to Iraq for the Condibot! Also, I'm sure you've heard by now that she had a bring 'em on moment by calling Sadr a coward. I'm not much of an expert, but that doesn't seem very smart to me! But then again, most of Condi's diplomatic skills are beyond my comprehension, so it's totally just me. She's the expert, after all! Um, go Condi!

Also, just to prove that the reports of Wonkette's demise are at least a few days premature, there will be a Condi Roundup today (Update: it's up!). A preview: 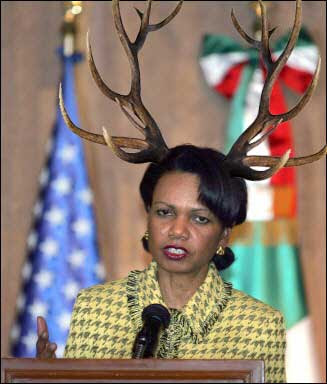 She's looking at Talibani with an expression I thought that she only used with Tzipi...

Is that last photo real? I mean, because if it is, I think that warrants an elevated hairdo threat level.

Is that a casket spray?

It looks like what they sweep up off Colorado Blvd. after the Rose Bowl parade.

See, libtards! Dick Cheney said we'd be greeted with flowers and now we are!

Haw, Haw, libtards! Wot's it liek bein' so stoopid all the time?

OMG she would SO give Trotski a run for his money! Eep!!

It's like that one Palmolive commercial. You remember the old ones with Madge when she would get her friends to soak their fingers in the Palmolive? There was one where Madge makes a joke at the end because she was sitting in front of a chandelier and it looked the same way. She said, "how do you like my antlers." It was funny because she broke character.

It's like I know you've already been there adn signed the petition, but here's the link anyway!
http://condimustgo.com/