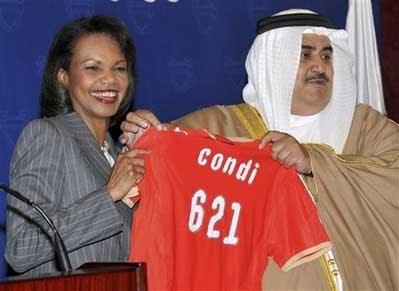 I mean, seriously, look at this guy: 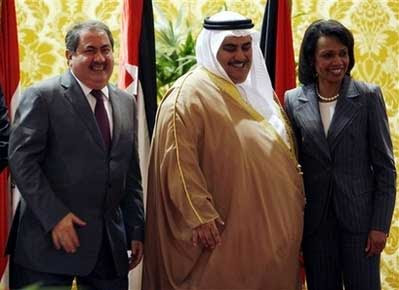 Every time you fill up your Escalade, this guy gets a little bit fatter. Eventually, he'll explode! The energy he expends while exploding will lead to important discoveries in alternative fuel sources! And then global warming will be solved! The end!

Doesn't Condi look like she's having fun? Like, tons of fun? Well, all she had to do was drop her guard for a second and her real feelings are frighteningly clear: 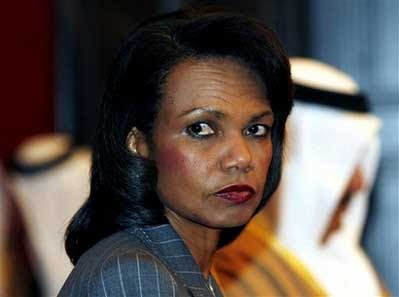 god, is she scary.

The whole thing is so screwed up.

Sheesh, she has no heart. That guy, if he has one, it is stah-rained!

Girlfriend has lipstick and blush on--that's the first time I've ever noticed her makeup. Unfortunately I think she got it from Harriet Miers' Mary Kay rep. PLEH!

Ladies, come with me to Saks or Bergdorf to the makeup counter, and we can load up on Ferragamos while we're at it. Makeover day with the Bushettes! Woo!

last pix she is looking at herself in the mirror

I'm with divageek on the makeup choices in the last picture. That is not too much makeup if you work for Ringling Bros., but if you aren't getting out of a tiny car with a dozen pals later today, you might want to rethink your choice of foundation.

Does anyone know what the 621 stands for? I guess that shirt might fit her, but when the big guy holds it up, it looks like it would be snug on three year old.

Big guy looks like Baron Harkonnen. Did Condi get "the spice?"

The Bahraini foreign minister is the same who met with our beloved giantess Ursula back in September. He was wearing a suit then. Why is he all veiled now? Does he feel the need to shroud his ampleness from Condi's yearning eyes? Or perhaps when he met with Ursula, he was so overwhelmed by her fabulocity that he flung his robes off and clutched at his rapidly beating heart. Just a guess.

Anthony 'Tony' Soprano Sr.: If I were you, I would seriously consider salads!
Bobby "Bacala" Baccalieri: Why won't you take a look in a mirror, you insensitive f%ck!

Perhaps she should have offered him a "wafer-thin" mint.

Is it just me, or has Lecondel's hair grown to mullet proportions? Perhaps a hair-alert update is due?

It's looking like Condi got a demotion from the puppet-masters that installed this puppet-government on behalf of Saudi Arabia.