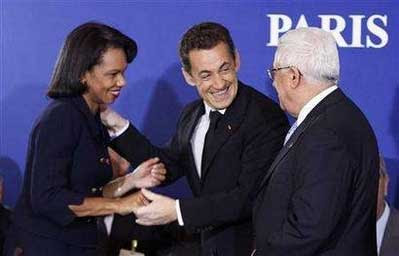 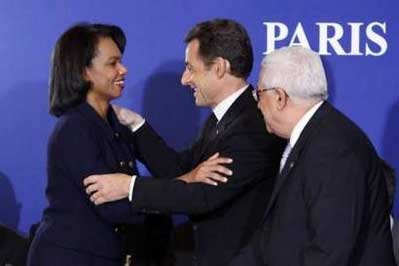 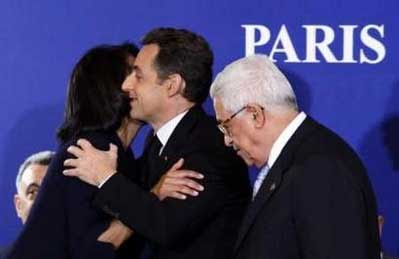 She's in Paris! See, it says so right there on the wall! And as you can see by the awkward fumbling above, it's Sarkozy time! Poor Abbas either feels totally left out or totally relieved. It's hard to tell!

Also, stay tuned for this week's Condi Roundup at Wonkette (will link when up! EDIT: Here 'tis!) in which I sort-of review Elizabeth Bumiller's Condiography (hint: it's boring!) and provide some alternative cover designs because, hello? That Book? It looks like Jeff Gannon's web site or something! Ew! A sample: 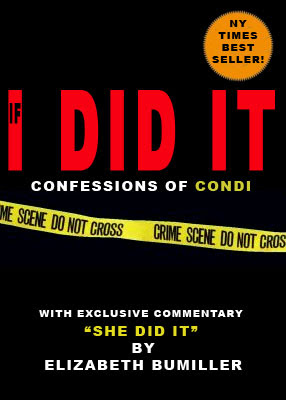 Condi extends her pelvis waaay back away from the French octopus.

you mean our Elizabeth Condimuller wrote a boring book? NO IT CANT BE -- nothing is more boring than La Liz's NY Times columns.

as for Condi in Paris
i heard she whispers to Abbas (heaven forbid that Sarkozy!)

"we will always have Paris"

PSP, you are absolutely brilliant!

I have an official new name for Condi:

The Mystery of Condi Rice
Where did she learn how to play the game? We still don't know after reading this book.

"The book does have a bland overall flavor—I couldn't quite make out whether Bumiller actually liked Rice. And it doesn't fully answer the No. 1 burning question about Condi's personal life, except to point out that she once almost married a professional football player, though no one seems to know why it fell through. She does seem strangely comfortable weekending with the president and Mrs. Bush, an ideal way to spend time if one were trying to avoid deeper emotional ties—as well as a neat way to cut out the influence of all those men who have wives, families, and other places to go."

"But Bumiller may be reflecting the blandness, or rather the remoteness, of Rice herself...She isn't chilly—on the contrary, she is unfailingly warm and polite—but she isn't exactly revelatory either."

"Which is very Condi: take no prisoners, leave no traces, express surprise that anyone is upset about it—then smile for the camera, and move on."

What's with the jacket? Is everyone going to show six inches of forearm this year?

Rice is a lousy oh-so-boring subject for a biographer (and only a second-rate journalist like Bumiller would take such an uninspiring subject on) because, as I believe Gertrude Stein said of Oakland, "there's no there there."

As a huge fan of John Kennedy Toole's masterpiece (and of tools in general), can you *PLEASE* put up a picture the "Condifederacy of Dunces" cover that you teased us with over at Wonkette? If my condimagination is on the mark, I would love to have it as the background on my desktop!