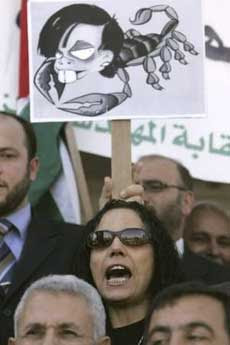 Jordanian protesters hold pictures of U.S. Secretary of State Condoleezza Rice during a protest in Amman November 27, 2007, against the Middle East peace conference in Annapolis, Maryland. U.S. President George W. Bush opens a high-stakes Israeli-Palestinian peace conference on Tuesday, trying to achieve in his final 14 months in office a goal that has eluded U.S. leaders for decades. REUTERS/Muhammad Hamed (JORDAN)

And, oh dear, the Jordanians have picked up where the Turkeys dropped off with target practice: 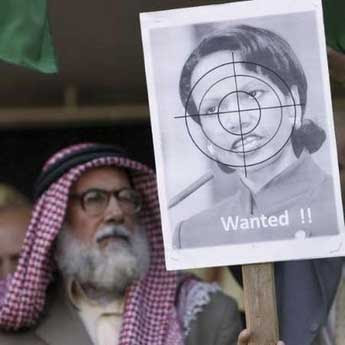 UPDATE: I really, really didn't want to include the following, because it's one of those awful "Think Pink" or "Code Annoying" or whatever people, but since it appears to be caricature week, I kinda have to: 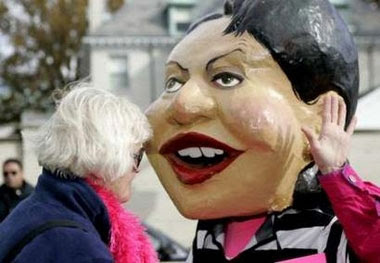 who cares about the faux summit....what does her hair look like today, and pray tell, what outfit? ferragamos? jimmy choos? please, princess sparkle pony, I await the details

My delicatessen is next door to Code Pink's headquarters: a tatterdemalion bungalow, packed with crones.

That last big Condi-head looks like a Rankin-Bass Xmas cartoon character -- look at those choppers!

The scorpion is gonna give me the nightmares.... Wonder what RandiBean thinks of all this? I'm sure she tries to soothe Lecondel in bed, but really--when they're making bullseye pics and papier-mache likenesses of you all over the Middle East, what can a gal-pal do?

I like Code Pink. It's the one time dykes came up with something before the queens thought it up.
You have your quilt, we have code pink! Don't be bitchy about it!

The scorpion does, infact, look like something that crawled offa John K's notepad during a brainstorming session for Ren & Stimpy. Maybe a Condi-Scorpion dancing in the tub with Bjork and the bubbles?