George Reveals Techniques for Keeping Uppity Condi in Her Place 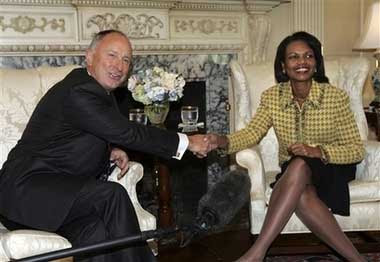 Yes, yes, standard matching armchairs stuff, OK? And she's wearing that oddball yellow houndstooth suit with the exaggerated frayed seams, the one in which she tried to woo hunky Canadian diploguy Peter MacKay in. I hope it works better with this one!

But anyway, George Bush is such an asshole! I'm sorry, but I just had to blurt that out! Here's what he had to say today about how he treats his Mocha Princess:

I don't think I've ever had a boss say something like that to me, the meany! Oh! I am just livid!
Posted by Peteykins at Wednesday, October 03, 2007

I want to remind you who is the rich white guy born to privilege who burned away most of his brains cells with liquor and drugs and who is the colored girl spinster who actually did some work at college.

This is the good natured ribbing that lets you know that you have a close personal friend who is a complete asshole.

You know, Princess darling, it's not normally the kind of language I would use (especially in your company), but...

Geez, do we have a Douchebag-in-Chief or what?

Every day one day less of it, though!

Ditto what Matty said. This from the guy who thinks of her as his "sister." What an asshole.

Also note that her diplo-mullet is growing in nicely.

President Poopy-Pants, your handbasket is waiting. What a bed-wetter.

We'll see if he can maintain his sense of "humor" shackled to the bench in his cell in the Hague.

They -- Bush & Kondi -- reinforce each other’s insecurity. Bush, who felt dumb and inferior at preppy Andover and upper-crusty Yale because he saw himself as a Texas hick (and you know, he may not be faking his Tex-thing, since his earliest formative years were spent in a Texas high school, despite the establishment background of his WASPy family partially out of the East coast), and Kondi, also feeling as something of an Atlanta provincial (despite her own upper black “bourgeoisie” upringing as a the daughter of a minister and with her advanced “degrees”) in the “bigger,adult world.”

They both are terribly INSECURE. He drank, she got her Ph.D.: essentially, one and the same thing.

My hope is that, after the disaster of eight Bush-Rice years is over, the possibly not-yet-lovers go on a cruise, have torrid sex with lots of booze/drugs involved, get married Vegas style, and settle on an island, somewhere in the Pacific, before it disappears into the ocean due to global warming. By “before” I of course meant “as soon as possible.”

I have never agreed with you more PSP, however, I also agree with Samael7.