It's Clearly a Typo 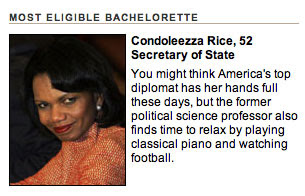 It's true! You might indeed think that "America's top diplomat" has her hands full these days... but you'd be wrong! And that's why she has all that time to hang around with Cal Ripken and other important ambassadors of American neatoness.

Pony Pal™ Blue Gal has just breathlessly informed me that Condi has been deemed the most eligible bachelorette in Washington by Forbes. Clearly this is an error; how, exactly, are they defining eligible? I think this is just another one of those clerical errors, as when she was recently, hilariously, named the most influential person in the District. LOL! As if!

Anything else funny about the article? We're also tied for 20th place as drinkiest city... with San Francisco? I'm sorry, but DC is way, way drunker. I think the most humorous thing about the piece, though, is that we're rated #6 best city for singles overall, perhaps due to our 33% unmarried statistic. Um... hello? Forbes? PSSST! We're all hairdressers! Or otherwise unmarriable! Also, apparently, we're the fifth best city for young professionals, which means that all those dirt-poor staffers on The Hill who are in their 20s but still have to have roommates are luckier than they knew!

Eligible AND influential - two words that look great on a resume!

Re the relative drinkiness of SF and DC - I've only spent limited time River City, but I wouldn't be surprised if that's accurate. My impression is that our two towns have a lot in common as 2nd-tier metropolitan centers. And though my travels are largely limited the hipster Mission District and the hairdresser Castro, I can tell you we drink A LOT. We probably drink more over Pride Week than DC does in a normal month. But then we probably do lot more heroin here too, so perhaps it balances out.

you know she'd wear the pants in any relationship.

I guess today's "eligible bachelorette" is yesterday's "old maid". Does she have more than three cats? Whatta catch.

Maybe she'd like to weigh in on the Vick case?

20th place can't be right for either city. They're both filled to the rafters with drunks AND hairdressers, sometimes both in the same package.

Spent a lot of time in SF and DC, and they are definitely more sober than a number of other cities. Chicago, Madison, Portland definitely pound more beer. And Drew, SF may have more smack than DC, but SF can't hold a candle (or a shaky lighter under a spoon) to Baltimore. That is smack city, and its pretty ugly.

Forbes is counting the black people.

She is a no body,as/in a tit on a bull.Only a chosen house slave like Pow Powell and Goonsalus :(

if the VERY handsome steve forbes thinks she is eligible -- WHO AM I to argue????

distributorcap I am quickly falling in like with you.

But she's so clearly Bush's junior wife in that bizarre triangle with Laura.

re: singles stat and drinking.

you know what they say about politics? It's sports for gay men.

DC is just one large sports bar for mo's.

Is that facial expression more "come hither" or the Grinch c. Christmas Eve?

So Forbes' population count was off by a couple of million? It's not as if he's in charge of money flowing into (?) Iraq...

Eligible for WHAT? eeewww!

She's the most eligible by default now that Merv Griffin and Liberace are dead.

How's she ever going to find Mr Right when she's flying all over the world bringing peace and balanced photo opts all the time? She's so busy she just doesn't have time to date and stuff.

She might be eligible for more fun time in 2009.

PSP, you're too young for this reference, but it is a shame that the Dating Game has gone off the air for this busy bachelorette. I can only wonder what forms Bachelors Number One, Two, and Three would have taken, and what saucy questions they might have cooked up for our Dr. Ferragamo.

Timing is everything, isn't it?

yeah, it shoulda been "most liable bachelorette"

I just saw that. Soooo funny!

Yes, I thought she already was married.

That's "eligible" as in "no one wants to go there". Condi Rice is as eligible as New Orleans is habitable.