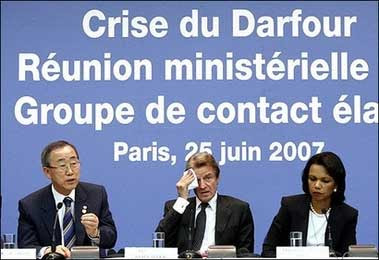 France's Foreign minister Bernard Kouchner (C) participates with US Secretary of State Condoleezza Rice (R) and UN General Secretary Ban Ki-moon in a press conference at the meeting with the International Contact Group on Sudan/Darfur. France, the United States, China and some 15 other nations agreed on Monday to redouble efforts to end bloodshed in Sudan's Darfur region by supporting a new peace force and negotiations on a settlement.(AFP/Thomas Coex)

It's too bad that none of them seem to know the question.
Posted by Peteykins at Monday, June 25, 2007

The mayo jar must've had a leak. Probably contracted that out to Halliburton.gov

He could also being wiping his brow due to the heat.

It's gettin' hot in here
So keep on all your clothes...

That, of course, is the lyric from the Condi Rice/Stephen Hadley remix.