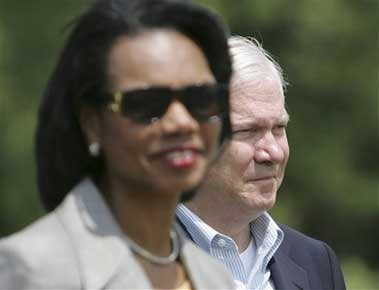 Yup, it's cowboy time for Condi and all her city slicker friends, and they had a very special guest... the Dutch Hula-Hoop Guy™! We love him! OMG, are we not men? We are NATO, LOL! Anyway, are you a little disappointed that we can't see Dr. Ferragamo's shades because of Kevin Lamarque's narrow depth-of-focus favoring the tiny, yet perfectly-formed secretary of defense? Well, I wanted to prepare you for the worst. Are you sitting down? Good, because I need to present you with the ugliest and most ostentatious pair of Chanel sunglasses EVER, and that's saying something: 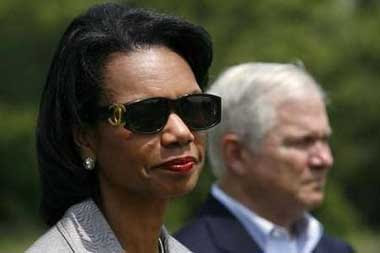 Oh dear. Honey, bad message. Your logos should never be bigger than your eyeballs. And the embarrassment gets worse, because at the ranch they just stick the podiums in the dirt and throw a couple of pieces of patio furniture in the bushes and call it a press conference, OK? It's really, really bad: 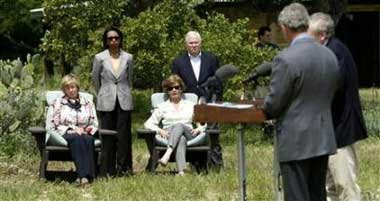 You know, I grew up in the Southwest, and babies, that just isn't Southwest chic. It can be done, but you're not doing it. I wish Crazy Eyes and Mrs. Hula-Hoop had beers, because that's the vibe I'm getting.

And then to top it all off, afterwards Condi wandered off and got stuck in a cactus patch: 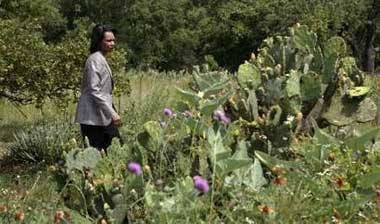 Overall I'd have to call this a very tacky day for the Bush administration.
Posted by Peteykins at Monday, May 21, 2007

Princess, I think it's Chanel, not Channel, but taking my word on fashion is never a good idea.

We hadn't seen the Tiny Secretary up close before. He has skin issues. I'd recommend sun screen, but only if I could get in a time machine and go back about thirty years.

The matching prairie armchairs shot looks like it should be lined up husbands standing, wives sitting, but we know the sitting women are married to others.

And besides, a woman, even a successful one like Condi, can't have a wife, can she? (Wink, wink)

You are, of course, correct on all counts.

Condi probably had to take a leak. With those glasses on, she probably couldn't see where she was going.

Better than the brier patch, I suppose.

First off, I am not going anywhere near those tacky-ass sunglasses. For real.

I think that the furniture is from the Martha Stewart collection at KMart!

And wink wink is right, I think that Condi and Mrs. Hoop-Hoop look like a lovely couple. Tsorry Tzipi, you can be replaced!

And I will try(unsuccessfully) to avoid making a crack about the cacti photo concerning Condi and a bunch of pricks.

That looks like the dullest, most depressing party ever. Just looking at the pictures makes me want to go take a nap, in hopes that they'll all be gone when I wake up.

2) Condi wandered off and got stuck in a cactus patch... Honey, when it comes to dry, prickly flowers, I'll take nopales over Condi any day.

Karen Zipdrive here...
To set up a press conference out in the middle of the cacti and uncleared brush is so typical of this bunch of hick carpetbaggers.
Lyndon Johnson's ranch had an air conditioned theater for such events. But then he was a real Texan and his ranch was real, too.
Condi's Chanel shades make her nose look huge and oily.
And everyone's dressed like they bought their clothes off the rack at Mervyn's.
Ugh.

in fact, if the nose came with the glasses, maybe i would pay $300 for a halloween joke.

Some comedian once made a joke that politicians should be like NASCAR drivers and wear the patches of their corporate sponsors.

Maybe Condi's making a move in that direction?

That lawn is terrible. Tell "Crazy Eyes" to put down her margarita, get off her duff, and get mowing.

(There's probably an off-color joke there regarding Republicans and immigrant labor, but I'm not going there.)

Get off her muff and get mowing?
Now that would be a comment!!

jason jones on the daily show interviewed skin & spin doctors who work with candidates on the campaign trail. one specialist works over faces with laser abrasions.

that small & perfectly formed defense sec'y could take a meeting with her and fix up his sad textures.

She is looking stunning in Chanel Shades