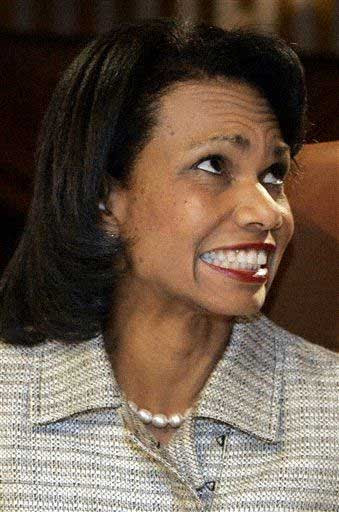 There's nothing forced about that dazzling smile! After all, nothing could be more fun for Condi than to be surrounded by all those other foreign ministers who surely think she's just SUPER-DUPER. Oh, I just know she was the belle of the ball.

BONUS! As mentioned in the title of this post, the above photo, wonderful as it is, is but an also-ran compared to this especially magical shot from two weeks ago. Pony Pal™ Drew in SF, dazzled by Condi's pixie-ish charm in that photo, wanted more of a good thing, so he has selflessly provided us all with a gargantuan blow-up of the best part of it. Click the detail below to fill your screen with marvelous Condilove, the greatest love of all. Pony Pals™, meet your new desktop picture: 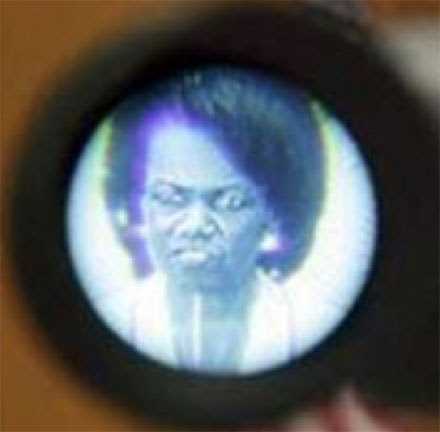 All I can say, if I may quote our Dear Princess, is OMG!

Wow. I'm honored to get not just mention but an image I blew up (using control+mousewheel on my Mac) included in PSP's article queue. I, for one, hope that I haven't incurred the ire of Condi's alien overlords :-)

Thanks Princess - I love yr stuff!

are you sure that wasn't a shot of her channeling James Brown?

The question asked was "Who wants cake?"

And Condi is answering "I would, pleeeeeeease!"

The cameraman caught her in mid pleeeeease.

They all want cake.

if mademoiselle royal wins the french election next month, I hope she'll qualify for the mega-girl sleep-overs - micheline, ursula, segolene, and condi! yay!

Yeah, that'd be tres cool. But Condi will be like Sandy in Grease - you know just kind of out of it in her own prissy little way.

All the other girls will smoke and talk about how popular they are at the UN and in NATO. Condi will feel so...square. And not just because she'll be the only virgin in the room.

Showing your back molars means never having to say you're sincere.

Those interlocking teeth were created to rip flesh, much like a Rottweiler's.

I realize now that the question must have been "Cake or Death?" The answer, was "Cake, Pleeeease."

Very well... give her cake.

Also, this might deserve a labeling for Happy Klingon Condi, which I think would be a first.

Condi is saying "eeesssescort service" - drawing out the "es", with a smile

This whole new Condi look is so retro.