Seriously, is the Edwards campaign effectively dead due to hairdo issues? Yes. Yes it is:

Thursday, April 26, 2007
Brushing the "Hair Issue"
WASHINGTON (CNN) -- Did New Mexico Gov. Bill Richardson take a swipe at former Sen. John Edwards when he said, "I think the American people want candor. They don't want blow-dried candidates with perfection." With only Sen. Chris Dodd, D-Connecticut, between Richardson and Edwards, the governor made the comment in response to a question over why he took so long before calling for Attorney General Alberto Gonzales' resignation. Only moments earlier, Sen. Edwards was asked to explain why he used campaign funds to pay for two $400 haircuts.

Annnnd a simple Google News Search tells the rest of the tragic tale. It is my sincere opinion that those two coiffure adjustments will be forever etched on the tombstone of the presumably unmanly candidate's bid for the big one. Tsk. If this blog has any "message" at all, it's this: hairdos matter. Hairdo mishaps ruin lives! Totally. Hairdo presentation management is a crucial aspect of any public figure's career, and the delicate balance of all possible hairdo arrangement factors (including, obvs, choice of follicle consultant) is upset at the unwary politician's peril.

But besides the whole making him lose thing, were the profligate trims worth it? Mmmm... well, yes, they were necessary. The best way to demonstrate the crucial role the candidate's hairstyle played in his public persona is to show a recent photo in which the spendy locks aren't included: 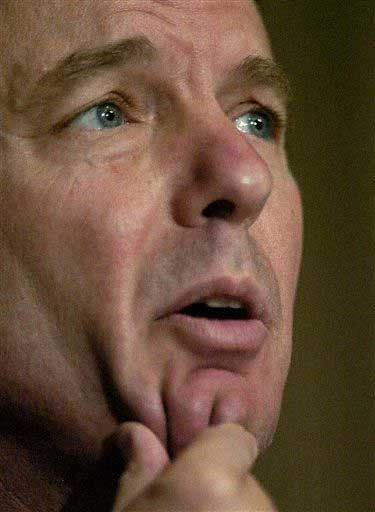 There's waaay too much time left for the hairdo to keep him from getting to the general. I think the reg'd dems realize there's too much at stake to let that kind of crap get in the way.

I was hoping you would expand & expound on this.

There was a LOT of bad hair up there tonight, but Edwards' hair screams "I am very concerned about how my hair looks." Bad hair is kind of a given in politics. Edwards' sin is working so hard (or, uh, paying so many campaign-donation dollars) for stupid hair.

Also, Wonkette commenters were suggesting Richardson is wearing a rug. Ideas? I say hell no, he's had that same big-ass Freddy Fender hair for 20 years.

Both Richardson & Edwards realizing the importance of good hair correlates with my choosing the two of them as my faves of the Dem hopefuls. Even though Richardson was dismissive, his comments do show that he knows what people react to.

The tangent that I am currently working on is that anyone would be upset with Edwards spending that money on his hair. First: $400? With the money being spent on Presidential campaigns anyway? Second: echoing the Princess' point; nobody in this stupid country is gonna pay attention to anybody with a bad coiffure, no matter how good their ideas are or what their resume looks like.

So Bill: I know you're annoyed with the Senator, but you really oughtta take a lesson: New hair, new poll numbers -- trust me!!

Edith. I would like to delicately point out that Laura Crazy Eyes Bush paid Sally Hershberger $700 to reconfigure the brown helmet. Maybe there is a Xanax corollary to your theory?

And can you remember back to the Early days of the Clinton presidency, where Bill was criticized for getting a 200$ haircut, while aboard airforce one as it sat on the runway of some airport. The commentators were all, "it was too expensive AND it delayed the planes of all the blue-collared proletariat."

The xanax factor is a separate issue... imagine if she were that crazy but was under Bill Richardson's hair. What would her poll numbers look like then?

While I agree with you that no one wants to listen to anyone with a bad 'do, how crappy is it that a good-looking guy who has great ideas is going down in flames, while Tubby Fenderhair gets a bounce in the polls? Puh-lease. Come on, 'Merica, own up to your addiction to Product and go with The Hair!

Who gives a damn about haircut money? It does seem to me to be a campaign expensse, actually. Most campaign ads have all the depth of a haircut. I am never so thankful to be without cable and TV in general than I am during campaign season.

Haircuts are a far more valid business expense than, say, football tickets! However, a report in Salon says that he was seen buying gel from a Chapel Hill drugstore. On the one hand, everyone knows that "salon product" isn't all that different, but buying it does create more jobs for hairstylists.

Nah. I think we're talking about a primary that's being decided by an ever more sophisticated constituency. I realize you aren't happy about it -- you just think it's correct. I just don't think it'll matter all that much when people hit the booths.

On another note, if he comes across lukewarm again, at the next debate, I think he's going to be in some real trouble.

I personally do not care what a candidate spends my money on. If I like the person, they can spend it on weed for all I care.
Edwards is a pretty guy and I sorta like that he's vain. That metrosexual thing works for me.

That's exactly my view on the subject. It's stupid, but that's how it is.

Arrr, he's cute even without hair.

Laura Bush spent $700 for a reconfiguration? She got gypped!