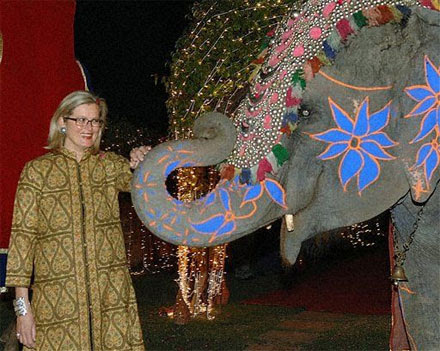 See? This is why I don't have to worry about posting those boring pics of Condi from yesterday. India's foreign ministry obviously wanted to make the affable giantess feel at home so they sent the ambassador closest to her scale (see above) to greet her. We never get fun shots like this with Condi anymore. Of course Ursula can get out 'n' about a lot more than our Secretary of State, since she's bullet-proof and has super-powers (mighty-morphin' scarf power) and everything.

I think the Indians were hoping that after the photo-op, Ursula would hop on the elephant and conquer Pakistan or something.

But I know that Pony Pals really love pictures which emphasize Ms. Plassnik's most remarkable features, her height and her scarves, so here's a special treat also from Friday: 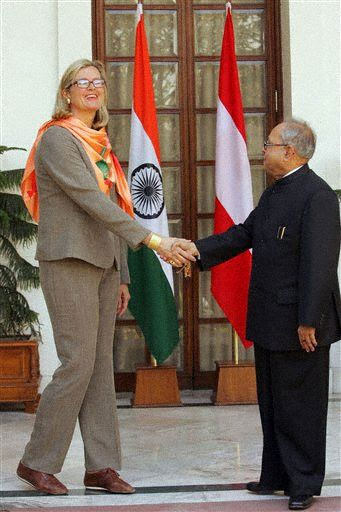 Note: Let's give Ursula a pass for the awful shoes, shall we? This ain't Dr. Ferragamo, folks. This is a real diplamazon!
Posted by Peteykins at Tuesday, March 20, 2007

The way their heads are, it looks like they are doing a very far-away air kiss.

Also, Ursula's shoes? Poor pigeon-toed thing with those scuffed non-sneakers. She looks like she just won the spelling bee.

If you insist, Princess, I will give the Austrienne UberFrau a pass on the shoes (although my God whatever happened to a nice pair of black ballerina flats?), if only because I am so thoroughly enchanted with her brocade, three-quarter sleeved coat in the elephant shot, allowing, as it does, for a good look at her spectacular bangles. It's not just scarves - this lady knows how to accessorize.

Back off, you two. It's hard to find shoes in the Gentle Giantess's size.

Muscato is correct. Flats are okay, but black and shiny beats brown and frumpy every day of the week. Those are only acceptable if Mukherjee has invited her to go bowling afterwards.

It was nice of her to find a scarf in the colors of the Indian flag. And the Amazon accessories! The earrings and bracelets and large pinky ring! Even in a frumpy grey suit with frumpier brown shoes, there are always reasons to show my UrsuLove!

Hmmm... I think that's a tan suit. I don't think Ursula's so out of it as to wear brown shoes with a grey suit.

Is that the new Republican Spokeselephant? I mean with friends like Matt "Dirty" Sanchez, Jeff Gannon Guckert, Ken Mehlman and Ted Haggard it would just make sense to re-do the elephant to appeal to the constituency.

And all those Scottsdale/Palm Beach/Orange County republican women will think the revamp is for them!!!

(PSP, would you entertain the notion of photoshopping the lovely Giantess' feet? Her feet are killing me.)

Seems to me Ursula doesn't need superpowers to get out more than our SOS. She simply needs not to be the most hated woman in the world since Tokyo Rose.

Have you heard Sleeza (with a Z) lately, talking about how IRAN is a destabilizing force in the Middle East? Takes one to know one.

And love, love, LOVE the tangerine Urscarf. I think it's my all-time fave.

First Pic: Wow! Her oversized Amazon Accessories(TM) and frock-cum-homage-Indien would be cool enough. But there's a painted elephant with her!!! With! Lights! And! Headdress! <3 <3 <3

That elephant reminds me of one a them "pass it on"-type emails my Mom's always sending me -- the one with the "painted" cats. Also I note that the elepahnt seems pleased to meet our Ursula! Her diplomatic skills are unbounded! No species is immune! mMuhahaha!

You know, with the errors that can sometimes crop up in the AP photo captions, are we quite certain that Ursula didn't bring the elephant herself? Imagine its trunk draped around her neck as a living scarf.