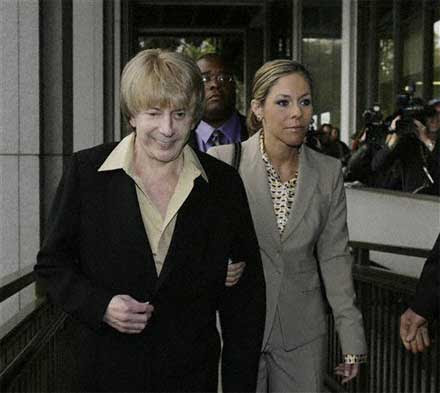 Music producer Phil Spector, left, arrives with his wife, Rachelle Spector, at Los Angeles Superior Court Monday, March 19, 2007, for the start of jury selection in his murder trial. Spector is accused of killing actress Lana Clarkson in February 2003. She was found shot to death in his suburban Los Angeles home. (AP Photo/Nick Ut)

Phil Spector's latest follicular escapades (oh, and also his lurid murder trial) are a welcome addition to the media landscape. Yes, there are some intriguing scandals going on, but none of them offer interesting hairdos (I miss Bob Ney!) or fashions. Not so Spector, where you never know what shining, fantastical sartorial journey may await. I was thrilled to see that he had cheekily reversed his bigger, bigger, biggest coiffure trend, radically backtracking to a pixie-like, skull-hugging boycut. What could be less creepy?

And, yes, Condi was photo-opping like crazy today, offering up both matching armchair arrangements and a dueling podiums three-way. She sure is a busy spokesmodel! Photos to come... maybe... they're kinda routine.
Posted by Peteykins at Monday, March 19, 2007

Now he looks like an old dyke real estate agent.

Wow! You nailed it, Zippie!

What about some pix of Josee?

Condi is starting to be known around the world as "The War Princess"!

Coincidence? I don't think so!

Actually, he looks like an old dyke real estate agent in Palm Springs, to be exact.

She wrote to him in jail. Convinced she would be a courtroom asset, he proposed.

Once the skin gets saggy on the pasty faced breed of male, the hair becomes irrelevant. Whether it's Sumner Redstone or Oakland Raiders owner Al Davis, you're gonna look like hell and there's not much you can do about it.

Heck, even Paul Newman can barely pull it off, and he has acting chops and the ability to recall what it was like being really pretty.

and boodos to Matty - Play nice! We saggy-faced types don't need you whippersnappers to point out our flaws. Believe me, they are WAY self-evident.

I think I'm even more scared of Phil Spector now than I ever was.

MattyBoy, as Princess Sparkle Pony has often pointed out, hair MATTERS...even on soon to be convicted murderers.

Is it possible these two are related?

You're missing one person - that lady in Florida (govt) who gained notoriety during the ballot/election miscount fiasco, Katherine Harris .. not a toupee but she ranks up there with Condy Ricey (goonie goo goo). Cheggitout:

-Peter in San Diego CA my gmail sn is swtpete