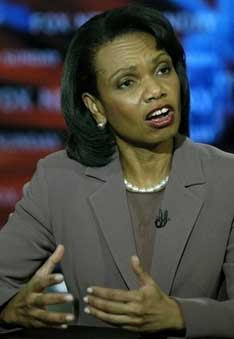 In this photograph provided by FOX News Sunday, Secretary of State Condoleezza Rice talks about her recent trip to the Middle East during the taping of the show Sunday, Feb. 25, 2007 at the FOX studios in Washington. Rice said the U.S. would hold direct talks with Iran if Tehran suspended its nuclear program. Iran's president, however, pledged to move ahead with enrichment activity that Washington contends masks weapons development. (AP Photo/FOX News Sunday, Freddie Lee)

As a special, extra-glittery treat, click the above picture to experience the thrill of Condi energetically cuddling her softball-sized, spherical, invisible friend! Yay! Note: she wasn't really that green, but the lighting was really terrible. Why does Fox News hate Condi?

Despite her praise, Rice ducked when asked whether Obama had the experience to be president.

Way to dodge that bullet, Dr. Ferragamo, but does that mean that she doesn't vote? And what else did Condi do this weekend before returning to Washington on Sunday to make the rounds of the morning shows? I'm guessing Peter MacKay. Here they are on Friday: 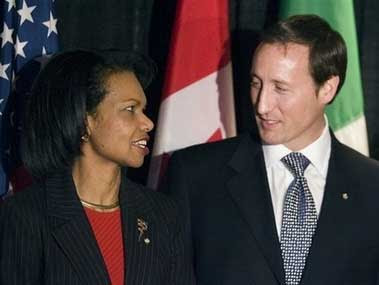 So Saturday must have been their luv day, one which they no doubt spent wandering around Ottawa, visiting local chain coffee outlets and creating buzz in that quaint, primitive land. Whenever she goes to Canada, it's like a fairy tale*, don't you think?

And, finally, it's always exciting when the Diplomatrix discusses her own personal religious views, as noted by the Washington Post:

Responding to tough comments from Russian leaders about the United States and its missile defense plans, Rice showed she's a policy wonk at heart. A scholar of the Soviet Union, she dismissed the idea that a new Cold War is brewing. "I used to do this for a living, arms control -- you know, how many warheads could dance on the head of an SS-18," the intercontinental ballistic missile.

*Speaking of fairy tales, I'm so pleased that El Laberinto del Fauno, easily one of the best films I've ever seen, won three Academy Awards last night. It's too bad that Guillermo del Toro didn't win one himself, but it's a rarity that anything even vaguely fantastic is recognized.
Posted by Peteykins at Monday, February 26, 2007

Condi should take all the grey suits out of her closet and start a bonfire with them. The suit she's wearing on Fox makes her complexion look like waxed fruit.

And while it's not my particular scene, I appreciate the male eye candy that is represented by Peter MacKay. After all, those of us who love the ladies get Ursula (sigh!) and occasionally Dora and Josee, but what about those who love the boys? Dick Cheney? Stephen Hadley? Anti-sex League, all the way.

And here's the fashion tip of the week! Remember the rocking socks we saw on Don Cheadle and the Emperor of Japan? Complete wastes of good money and material. If you want the ladies all weak in the knees, get yourself a Peter MacKay HypnoTie™! Your next diplomatic overture is sure to be reciprocated, and I don't just mean getting her to wear the same lapel pin as you.

All that speculation and not even one reference of the fantastically super-fantastic term "Diplohunk"?

So she used to do arms control for a living. Since she's the SOS, wouldn't it be kinda nice if she still did?

She seems to be turning green... patina, maybe?

So much for guiding the black vote.

PSP--
Also a big fan of Pan's Labyrinth. I saw it right after I saw Children of Men (which I also loved), so the impact of the second harrowing but beautiful film in a short period was somewhat lessened, but I did truly love it. Both directors were ROBBED at the Oscars, IMO.

Children of Men was also excellent, and really sold short by its American studio, which is a shame. I thought Pan's Labyrinth was a better film, though, because Children had some loose ends and was a little flabby in the editing, whereas Pan was just airtight in every aspect.

The final line, "We won't even tell him your name", practically made me levitate.

I think Pete n Condi make a cute couple; however, as for their 'luv day' I just can't visualise (and I use the word with some trepidation)the point where their eyes meet and they lose their inhabitions, start kissing, and ... you see what I mean. Hmmm...