That's Doctor Missy to You, Bub! 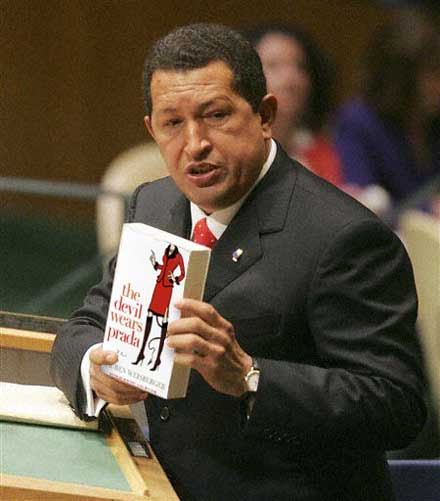 Um, I don't really get it, but I've been dying to do something with all those pictures of Chavez holding up that Noam Chomsky book, so it'll have to do.
Posted by Peteykins at Monday, January 22, 2007

um...forgive my doubting, but is this a really real Condi photo?


I'm not even sure where that would fall on the Condoleezza Hairdo™ Alert System.

Yes yes, there is a Condi moment in here to be found with the Chavez tie matching the headless red suit. Somehow it all screams 'Condi' albeit in a very understated way.

Clearly the devil in Prada is Dr. Ferragamo; notice the stormtrooper boots on the cover.

Chavez is being nice -- more often than not the devil wears some tacky old chanel crap made in one or several of the 'developing' countries her highness likes so much to... help.