Seriously, how overdue is this? And unlike the Homeland Security system, we've seen most of these alert levels except for the top one. The mind reels at the possibility of Severe Hairdo Alert, doesn't it? 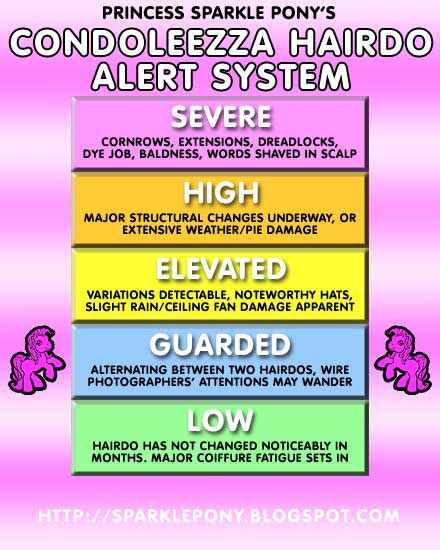 So anyway, this thrilling new feature is now permanently embedded in the right-hand margin, so you can tell at a glance how Condi's hairdo is doing (at least in public). And while I'm confident in my status as Your Leader in Condi Hairdo News™, any tips, news flashes, leaks or coiffure-related unsubstantiated rumors are always welcome.
Posted by Peteykins at Sunday, July 31, 2005

A most welcome addition to your site. Thank you Sparklepony!

Oh, what a relief not to have to read about Hillary's hair anymore.

That's the one good thing Condi has done for us.

I hope there's some kind of mitigation program in place - I mean, what do we DO(!!!) if it hits SEVERE? Run out and buy discount hairspray? Make bandoleers of curlers? Form into defense cadres armed with picks and afro-sheen? Not a pretty picture. (laughter) LOVE IT.

I like to immagine her in a really fast convertible, but I can't decide what happens to her hair. It's sort of like Ken.

Oh, the second she steps into a convertable, the alert automatically gets raised to "Elevated".

But Our Leader says we're fighting them over thar, so we don't have to fight them over hair.
Those who don't know his story are doomed to lather, rinse, repeat it.

OK, you do the head, and I'll track her pubic hair.

Hey, somebody's gotta do it :)

is there any way we could figure out the exact formulation of product and fussing that goes into Condi's harirdo, I swear if we could we could mass produce it and ship it to Iraq, it's got to be cheaper than Kevlar. What a fabulous line of defense, plus think how pretty everyone would look with their own Condi helmut! Any ideas on how to get our own no bid contract on this?

You'd think that, after Katrina and with Condie racing to the Deep South for a church photo op, her hair would be a mussed. What's the latest report?

I love it, even put up a link on my blog. But where would "Too much frickin' 'Aqua-Net' rate ?"