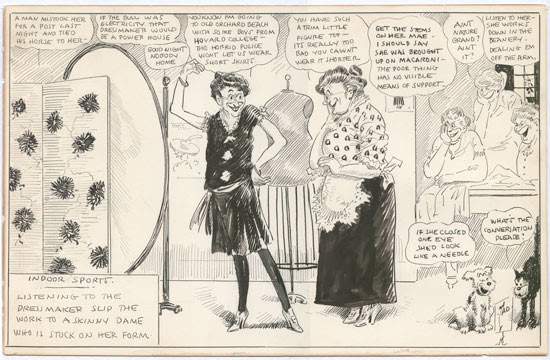 It's been a while, but I've acquired a new "Indoor Sports" drawing by the prolific Thomas A. "TAD" Dorgan, and this one is a rarity: an all-female scene. Tad's cartoons usually took place in a man's world, so this one is a real treat.

The scene is a clothing store for ladies, and the central figure is trying on a bathing costume; yes, that is a swimsuit, complete with stockings! Tad's scorn is aimed primarily at the customer, who seems to think she's a real beauty despite being what would be seen at the time as grotesquely thin (this is almost a half-century before Twiggy, remember). His secondary target is the insincerity of the dressmaker, really laying it on thick to close the sale. Crowding the rest of the cartoon is Tad's typical Greek chorus of scornful onlookers.

The drawing is undated, but it's easy to narrow things down to a couple of years thanks to the style of the bathing costume. In the 1920s, standards of bathing suit decency quickly relaxed, and one-piece suits had become de rigeur by the second half of the 20s. The customer's comments show that shorter skirts were coming in, but still resisted in some areas. Furthermore, "Ain't Nature Grand" was a popular song published in 1921. All these points indicate a likely date of 1922-25.

Most of the slang in this one is pretty easy to decode. "Pins" were legs, and "dealing 'em off the arm" is an old term for waitressing, but otherwise everything is fairly straightforward. "What's the conversation" is early 20th century for "WTF?" and would remain a popular term for years to come.

Stylistically, this is top-notch Tad, with lots of brushwork, pen hatching, patterns, a well thought-out space and plenty of figures and objects. He kind of loses it on the customer's upraised arm, but I'll forgive him that, because the pose is hilarious. When Tad spent more time on a drawing such as this one, it really shows.

Click the "Tad Dorgan" tag below for LOTS more of his work.
Posted by Peteykins at Monday, July 06, 2015

Yay! More TAD! The customer's pose made me do a google image search, because I swear I've seen it before somewhere. Poor ladies, if you only knew how much worse it's going to get, and then BOOM! The Bikini!

Really glad you like them, samael. I'm anxiously awaiting an auction to end on another one, not as nicely drawn, but really funny. Coming soon I hope!

I appreciate these. Thanks to you details I once overlooked, I now appreciate.