There's A Metaphor In Here Somewhere 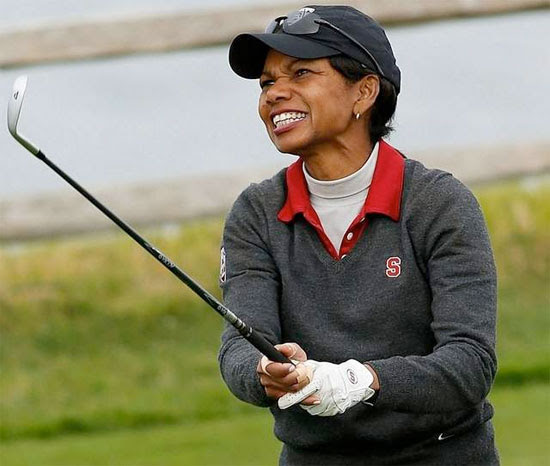 Condoleezza Rice and golf just don't go together, as I've noted before. This time, she's just stone cold whacking people on the head with her balls (presumably not the first time):

The ball struck a spectator on her forehead, which gushed with blood and sent her to the ground to recover.

The woman wept in pain while her daughter applied towels and medical personnel hustled over. Rice apologized to the woman and had an assistant get her phone number.


The rest of the game went downhill from there.

Why do people keep putting dangerous objects in Condi's hands? Haven't they learned by now?

Thanks to Pony Pal David for the tip!

That's the best Condi golf story ever. Thank you so much.

I'm sorry about the woman's head, but I laughed very hard when I read this. And that photo is priceless. What an interesting contrast to Bush in the Bath. Wow. 2000-2008 redux!

A simply dreadful, simplistic person who should never have been in charge of American foreign policy. 9/11, the "intervention" in Afghanistan, the Iraq fiasco all came under her watch; not to speak of her involvement in torture policy. Meanwhile, she's rewarded by playing golf and teaching at Stanford. How does she get away with it?

Check out them choppers!

Kind of like Cheney's big day among the dazed birds...

How about a pairing with tiger woods