Richard Cohen Has Totally Lost His Mind Over James Bond 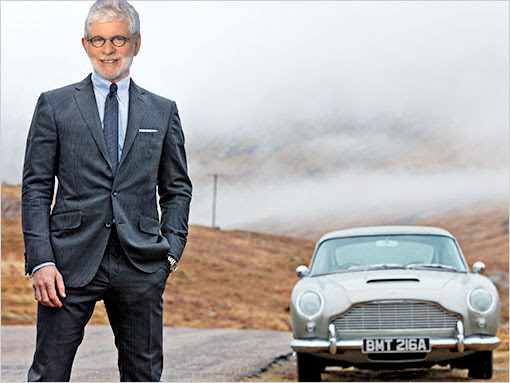 Richard "Please Punch Me In The Face" Cohen... I can't believe I'm saying this, but maybe he should stick to writing about politics?

His latest column is, for some reason, about how Daniel Craig is too damn sexy and buff, and about how, at 44 –44!– Craig has no business being so studly and ripped. Daniel Craig makes Richard Cohen feel funny when he looks at his "marbleized" body.

Why can't Daniel Craig be more like Cary Grant or Humphrey Bogart or Sean Connery, the latter of whom was, evidently, not sexy as James Bond at all?

And then Cohen bemoans kids today –tsk– with their hours spent in the gym and their protein powders 'n' such. Cohen also uses the word "zeitgeisty," which is not a word, and alone should get him fired from the Post.

And then... then.... OMG, he ends with a "Cohen. Richard Cohen" line at the end, just to prove that he is the hackiest hack in hackville, and because James Bond's favorite drink is also his own.

And then Richard Cohen finished the last drop of scotch from his bottle, hit the "send" button, and passed out.

UPDATE: I shared my thoughts with a fellow Cohen-watcher, Pony Pal Pareene, who responded:

(Also he doesn't appear to know that Cary Grant was a circus acrobat!)

He used "zeitgeisty" because he is frothing that a mere comedian got a made-up word into the Oxford dictionary (Stephen Colbert, "truthiness")and so Cohen is going to take a flying stab at it because HE wants to claim a made-up word in it.

I've seen "zeitgeisty" used before, but only on sites like Gawker and... well, on sites like Princess Sparkle Pony, where made-up words are acceptable. In the Washington Post, though? No.

It's screaming "Fire Me!"

AUDIENCE: Hey, Richard Cohen, show us how good you can lie!

RICHARD (ogling Rocky): I don't like a man with too many muscles.

If I didn't know that this was real, I swear you had made this up! I am so inspired by your poetry that I've been inspired to make a love offering!
http://postpunkmonk.files.wordpress.com/2012/11/hacky_hack.jpg?w=700

Didnt RC go out with someone famous because they thought he was TOO handsome? why dont we have more stuff about THAT? Thats the problem; simply not enough coverage of RC; hows a poor schmuck supposed to remain legendary without a pec potshot or twelve?

It's like he put off experiencing the changes our world has undergone in the last 40 years until now. And it's coming as something of a shock.

Even Cohen's eyeglasses inspire assaulting him with the nearest brick or beer bottle.
Guys like him are why the Yiddish language includes words like putz and schmuck.