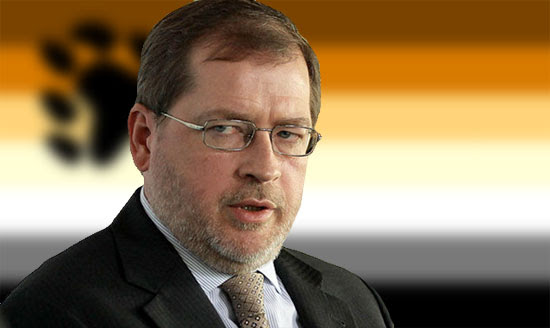 Ummm... so what's up with Grover Norquist? Regard:

"Quote unquote, the Republicans who are open to tax increases, every one of them has sugar plum dancing fairies in their head of fundamental entitlement reform, and some of them, fundamental tax reform,"

"If you had a pink unicorn, how many dollars in taxes would you raise to trade for the pink unicorn?

For the very first time, I'm actually looking forward to hearing what Mr. Norquist has to say next! Can Sparkle Ponies be far behind?

Email ThisBlogThis!Share to TwitterShare to FacebookShare to Pinterest
Labels: glitter and/or sparkles

Between the fairies and the pink unicorn, there seems to be some sparkly homoerotic thing at work in his imagination. With that name and that look, he gives off a bear-ish sort of feel, but I can see how the pink things might appeal to him.

Grover has a munchkin voice so to hear him talking about "sugarplum fairies" seems perfectly natural.

Did Richard Cohen and Grover Norquist go to high school together?

Do not sully the good name of the proud bear flag by associating it with this shitstain.

Maybe there'll be an opportunity for him to work some issues out at MAL in January.

I think if Norquest and Karl Rove were stuck in an elevator for a few hours, they would fall in love, quit their jobs and become full time guest speakers on the GLBT circuit.
They could even author a book called, "Nelly Bears in Love: Who Gets to be on the Bottom?"