I Think I May Have A Jennifer Rubin Problem 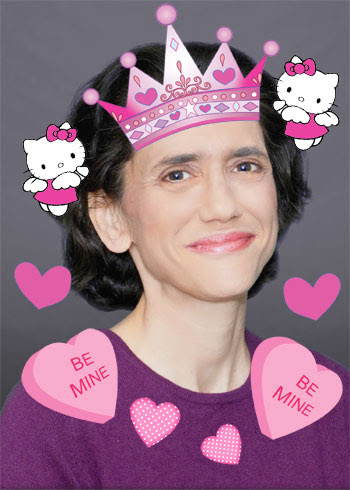 My Jennifer Rubin problem is embarrassing: against all better judgement, I can't stop reading her crazy/wonderful blog at the Washington Post! It's so good! It has honestly become my first stop when I visit the Post online. Given the state of the once great paper these days, that's not saying much, but still!

And she's super prolific and always so obvious! When the rising popularity of Herman Cain alarmed her, she didn't just write a strongly worded condemnation of him, but post after post, numbering in the dozens, relentlessly flogging the hapless candidate. Before that it was Perry. Now she's currently doing the exact same thing to Newt Gingrich, and it is stunning. Here are some recent post titles: "In the Iraq War, Gingrich was with Obama, Clinton and Reid"; "Gingrich leveled by his own words"; "Gingrich's hand in the Washington cookie jar"; "Newt and NewtCare: The biggest liabilities for Gingrich"; "Gingrich wins the hypocrisy primary", and, hilariously just today, "The right begins to dissect Gingrich".

Rubin is so much fun. She'll claim one moment that she isn't concerned with "social issues", but then will proceed to use them every chance she gets when they can be employed as a weapon. Just today, for instance, she approvingly linked to an article by somebody from Concerned Women for America to justify further bashing... you guessed it... Cain and Gingrich. Also enjoyable is her arrested name-dropping: people are forever emailing Jennifer and calling her on the phone to offer her hyper-insidery info 'n' opinions, in practically every post, but these people are almost never identified by name. Rubin is the anonymice grand champion! And wouldn't you know it, these anonymous sources, entertainingly, say the meanest things about everybody! Like, really funny mean things that sound like Jennifer wrote them herself.

But Jennifer Rubin doesn't hate everybody and everything! She luuuuuuuvs Rick Santorum, of course, since he's the purest neocon muslim-hater in the running, and still writes about him approvingly as if he's a viable candidate. When Santorum didn't gain any traction, she quickly jumped on the Romney train and rarely says a bad thing about him.

And... and... OMG, I could just go on and on about how great/horrible Jennifer Rubin is. She is the world's first and funniest neocon cartoon character! It's like... one of Josie's Pussycats grew up all wrong? They should make her a character in Archie Comics. You should read her blog all the time.
Posted by Peteykins at Friday, December 02, 2011

This is the best news I've read all week.

Her skin complexion is pretty good, and her hair has potential (although, am I seeing some, er, mismatching there in the general eyebrowy regions?) but I think she needs to swallow her differences with Les Gingrich and get a little Callista into her life.

I realize she's not running for office, but she should still set the right example.

gack, she reminds me of those terribly, terribly earnest girls in high school chasing me down the hall to "tell" me something oh so important ( that really wasn't)

Although I do feel sorry for the cray-cray conservative political GOP suck ups. That presidential field is so shallow if it were a puddle you couldn't drown in it face down.

Wow, I never knew what Jennifer actually looked like. All I had to go by was that silly cartoon on her Post blog. Now that I see her, I'm amazed at how.... ordinary she is. Oh, and she's also 12 years old. Was she alive when Reagan was President? Or does she only barely remember the Contract on America?

We need a picture of Jennifer giving a big thumbs up.

She's a bit mannish for my taste, just sayin...

You're brave. I can barely stand to read political commentary anyway ... but from sone one I don't agree with would lead me back to chronic hairpulling. If I had any hair left.

Did her mother die? Is that why she's apparently not eaten anything in years?

Somebody, please, have mercy, bring that woman a big plate of spaghetti and meatballs!

'cept for the hair JR bears a strong resemblance to Obama. Is this the real 'secret love child' story? Just askin'.

Peteykins: yes, she does, is what I was getting at. If she's going to be a neoconservative diva, she needs to step up her game. We can't all have mobile hair command units and large Tiffany's accounts. But that's no excuse to look like we don't.

Also, speaking of Callista (yeah, I know, it was Ms Rubin, whatevs, call me after her salon visit and eyebrow pluck), I've just become aware of the in-between phase of Callista, the period, I think May 2011, where her deus ex Coiffure was still hardening into it's fabulous current state.

I was looking for a picture of Jennifer Rubin the actress when I came across this picture, I can't stop laughing.