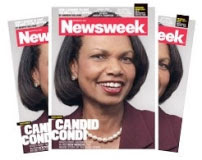 Here we go, let the Condibook circus begin! Long-time Pony Pals™ aren't likely to fall for any of this nonsense: we all know this book is going to be boring and will contain, at most, one or two amusing stories and zero percent actual reflection or insight.


And now the proof is in as Newsweek and The Daily Thing have published what are probably the only parts anybody will care to read. Now, you'd think that "The Wounds of Katrina," Newsweek's excerpt, would be especially interesting to readers of this blog, because it covers one of her signature moments, her NYC shopping/theater spree which gave birth to "Dr. Ferragamo," her most enduring nickname:

That evening, upon arriving at the Palace Hotel, I flipped on the television. Indeed, the hurricane had hit New Orleans. I called Henrietta, who said that the main issue was making sure our people [Note: she means "State Department People"] were safe. She’d also convened a departmental task force because offers of foreign assistance were pouring in. I called Secretary of Homeland Security Mike Chertoff, inquiring if there was anything I could do. “It’s pretty bad,” he said. We discussed the question of foreign help briefly, but Mike was clearly in a hurry. He said he’d call if he needed me. I hung up, got dressed, and went to see Spamalot.

The next morning, I went shopping at the Ferragamo shoe store down the block from my hotel, returned to the Palace to await Randy and Mariann’s arrival, and again turned on the television. The airwaves were filled with devastating pictures from New Orleans. And the faces of most of the people in distress were black. I knew right away that I should never have left Washington. I called my chief of staff, Brian Gunderson. “I’m coming home,” I said.

Haw: I made some phone calls, saw a show, watched some TV, went shoe shopping. Notice that she doesn't mention that she caused a mini-riot while she was at Ferragamo, with people screaming at her about shopping for luxuries while people were dying. No, she just leaves that part out. How candid! She also somehow forgot to mention that she had been openly heckled and booed at Spamalot. How did these reactions make her feel? I guess we'll never know.

Anyway, it turns out that through it all, Condi was an absolute paragon of racial sensitivity. Phew.

Much, much more fun is the excerpt at The Daily Tina Brown, because finally we get Condi's side of the whole "meeting with Muammar Gaddafi" show, and it is amusing and alarming ("...after sundown the “Brother Leader” insisted that I join him for dinner in his private kitchen."), but Condi is such a robotic, unstylish writer that she even makes that sound boring. Here's the best part:

At the end of dinner, Qaddafi told me that he’d made a videotape for me. Uh oh, I thought, what is this going to be? It was a quite innocent collection of photos of me with world leaders—President Bush, Vladimir Putin, Hu Jintao, and so on—set to the music of a song called “Black Flower in the White House,” written for me by a Libyan composer. It was weird, but at least it wasn’t raunchy.

Dear me, yes, at least it wasn't raunchy! Because that would have been, you know, interesting.

Next up: Condi appears on 400 television programs and candidly reveals what a great honor it was to be made secretary of state.  It will be thrilling!
Posted by Peteykins at Monday, October 24, 2011

Glad for you, Peteykins, that Condi has stepped back into the spotlight, however briefly. Too bad she won't have an ugly tour bus while promoting the book.

Seriously, why do these prominent political types get away with this kind of shell game - so "I knew right away that I should never have left Washington: - wow, that's some profound insight there, some awesome leadership.

She can recite this at the next time she's on the panel at a Motivational Seminar ("$19.95 for everyone in your office!"), that is, unless the audience is more interested in Bill Cosby.

Hey, at least she used the word "raunchy". The thought was there.
Was a copy of the tape among Qaddafi's prize possessions when he was captured?

"Prized possessions" he meant to say.

Phrases like "The Daily Tina Brown" show why you're a much more amusing/clever writer than I'm afraid Condi will ever be.

PSP will be remembered; CR, thankfully, will not.

Condi HAD to put the Ferragamo incident in her book because it is so well known so of course the recollection is robotic. The arrogance is almost as breathtaking as my lack of a sense of humor this morning.