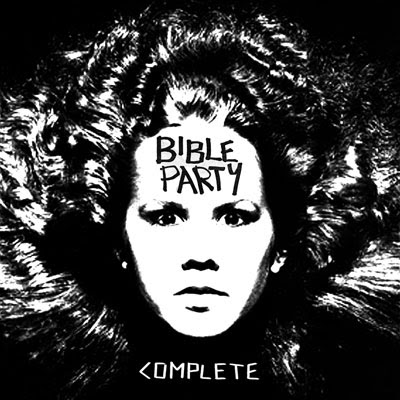 Here's the long story (sorry!) and the unnecessarily complete recordings of my first band!

One night we were at a great, fun party at our friend Jeff Davis' house. Before the party, Jeff had found a big box full of those little Bibles religious groups liked to distribute as freebies, and he "decorated" his place by ripping them all up and scattering the pages everywhere. He made the environment even more surreal by lighting it with only black lights and passed out fluorescent markers for everybody to draw all over each other. Jeff, Laurie and I were all leaving Tucson at the end of the Summer, and at the party we talked about how fun it would be to form a short-lived band before we all dispersed.

We were obsessed, at the time, with the concept of "trashiness," and called ourselves and our friends the Trash Bag Gang. We fantasized about our band making the garbagiest, dumbest music possible, inspired by groups like Redd Kross and the Urinals. "Trashiness" meant Linda Blair, ET dolls, Cabbage Patch Kids, other dumb pop trends, bad movies, cheap beer, and bad taste in general.

Somehow word got out about our non-existent band, and the rumor spread to this idiot named Jon Rosen, a DJ and music rag publisher who fancied himself to be the king of Tucson's music scene (sadly, he was right). Jon started bugging us and our friends about this fake band, which we dubbed Bible Party after Jeff Davis' great soiree, and we (and our friends) exaggerated our accomplishments. Soon, people started actually believing we were this great secret band, even though we had never played, never practiced, and had absolutely no songs or, really, any willingness to write any.

Finally, Jon Rosen told us that he was making a compilation tape of local bands, and he wanted us to be on it. This was hilarious to us, but we realized that we had to shit or get off the pot, as the saying goes. We decided that Jeff would play guitar, Laurie would play bass, I would be the lead singer, and Lenny would be our "spiritual advisor." I wrote the lyrics to two songs, Lenny Lenny and Bulimia Rhapsody, and Jeff enlisted the Seldoms' drummer, the fantastic Cheryl Graham (read her reminiscences of Leif Garrett showing up unexpectedly to her birthday party here), with the promise that it wouldn't be a continuing enterprise. We hurriedly composed the music, but made a point not to practice too much for maximum awfulness. Our friend Lance Kaufman recorded the two songs on his four-track cassette deck, and suddenly we were a "real" band! Sort of!

A real band has to perform live, though, so we arranged to play our two songs in between sets of a terrible new wave group at the horrible Nino's Steak House. We were just terrible (success!), but the audience was enthusiastic. Here's a flier for the show: 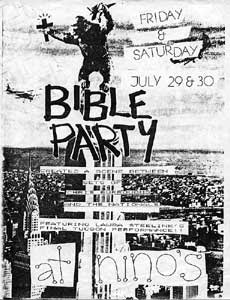 Click for bigger!
Shortly, Jon Rosen's dumb cassette compilation of local bands came out. Info about this release, now of interest only to Giant Sand completists, can be found here. To give you an idea of what a raging egomaniac Jon was, he put a picture of himself on the cover, and the first sounds on the tape were of him talking (and taking a hit off a joint). Imagine our surprise when our song, Bulimia Rhapsody, was actually put into light rotation on his radio station, the godawful 96 Rock. I heard it being played in Zip's Records!

And that was that. Or so we thought! The following year, 1984, my friend Al Perry invited Bible Party to perform a "reunion" gig (LOL) with his fabulous band, Cattle, at the venerable Temple of Music and Art the day after Christmas. Cheryl, thank goodness, was game (Such a good drummer! We didn't deserve it), and all of us were home for the holidays. This time, two songs weren't going to cut it, so we enlisted our buddy Steve, a fabulous guitarist with whom I had been making music, to assist us. We had one practice session, and sort-of learned a few covers and songs Steve and I had written, and even wrote a new song. I remember after practicing the Urinals I'm a Bug and Jimi Hendrix's Foxy Lady, I said, "Gosh, I've got to get the lyrics and learn them," and everybody screamed "NO! Don't you dare!" simultaneously. So I promised I wouldn't. Here's the flier for that event: 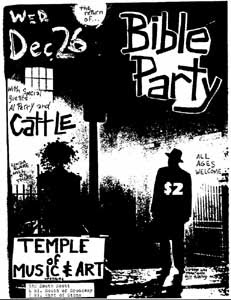 The night arrived, and we prepared ourselves chemically for the big event. To say that our performance that night achieved "trashiness" is a gross understatement. OMG, this time we were way, way beyond trashy, although there were moments of extreme musical weirdness which somehow transcended awfulness and approached some kind of horrible genius, if I don't say so myself. "I remember being really stoned," recalled Jeff later, "and giving birth to an ET doll on the stage of the Temple of Music and Art with a strobe light going. And it felt goooooooooooooooooooooooooooooood." To make matters worse, or better, the sound man totally sabotaged us, adding effects without our permission and, thus, clinching our reputation without even realizing it.

And that, finally, really, was that.

So! If you have brave ears, you can download the complete surviving recordings and fake "cover art."  It includes our two "studio" recordings, the only recording I have of one of the songs from our first live show, and the complete "reunion" gig (you won't believe it). And there are bonus tracks! Steve and I re-recorded "Bulimia Rhapsody" with Jeff guesting on second guitar as well as a quasi-Country Western ode to William S. Burroughs, "Cut it Up!" which had a Bible Party-esque feel but with superb guitar. Another interesting experiment features BP members Jeff and Laurie on lead vocals: "Conspicuous Consumption," in which the two of them were given the (retarded) lyrics right before recording and taped separately without being able to hear each other with surprisingly good results.

The 78mb mp3 files are zipped up and available for download here.

That is a great story. It's got everything, from wry pranksters, cretinous self-styled scenesters, to a real-yet-apocraphyl band-name-origin story.

It's funny, but I swear I can remember a similar story happening in my local music scene, circa college.

But how nice to pull it off with some fun and talented people committed to the joke.

I was at the Nino's gig. It was wonderful!