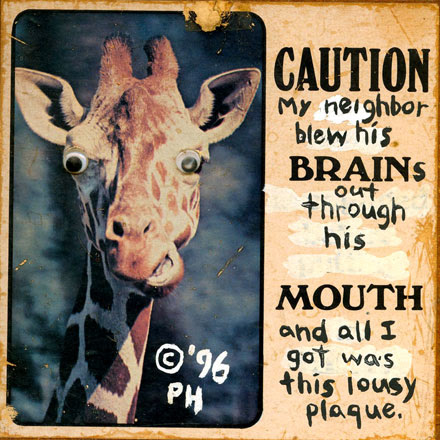 In the mid- to late-nineties, I lived in an apartment above a block of storefronts at 9th and Broadway in downtown San Diego. There were seven one-bedroom units in a row alongside a shared indoor/outdoor hallway which connected in the middle to the stairway down to the street. I was in #6, my friend James was in #3, my friend Kat was in #7, and the other four contained an assortment of interesting characters, such as the elderly gentleman in #1 who always sported a sensational Roy Orbison-style wig.

The man in #2 was a strange old guy, a World War II veteran who lived by himself and usually looked drunk to me. Sometimes he would blare records super loud out his windows, top volume, a peculiar mix of Sousa marches and dated German band music. He was cranky. He'd scowl at you. He loved Kat, though! Lithe, sexy and somewhat crazy, more than a little like some ersatz Edie Sedgewick, she charmed him and developed a kind of ethereal rapport with him.

One Sunday, I think in 1995, I was hanging out in my apartment and happened to spy, out of my window, several black-clad SWAT snipers on the roof of the building across the street, all aiming their rifles at my building. Startled, I stepped out of my door into the hall, where I was greeted by several more SWAT guys, the nearest of whom turned in my direction, put his finger to his lips, and whispered, "Go back into your apartment." OK!

Several hours later, the coast was clear, and Katrina filled us in on what had happened. She had run into the guy in #2 in the hallway, and he was despondent. He told her he wanted to kill himself. Kat, wishing to calm him down and sober him up, took him into his apartment, where the two sat and chatted in his living room. Kat's efforts where unsuccessful, and he surprised her by taking out a pistol and really, in earnest, threatening to hill himself right then and there. Somehow, she convinced him to call the police, and that's when the snipers moved in.

Two days later, I saw the old codger in the barbershop downstairs as if nothing had ever happened. I never did find out what the consequences were, if any, of his little police stand-off, but it seemed as though the whole thing had simply been more-or-less brushed off.

One afternoon about a year later, James in #3 heard a loud sound in the hallway and brushed it off as something falling over, like a broom or a bicycle pump. A little later, he stepped outside into the hallway and found that the guy in #2 had finally been successful: he had dragged a dinette chair out into the hallway and shot himself in the head. I arrived home just as the ambulance was taking his body away. There was still blood on the floor, not much, and the various markings and tape barriers left behind by the police.

All of us felt the same: it was sad, yes, but inevitable. We all knew he was going to do it. At the same time we realized that he had been considerate to shoot himself in the hallway rather than inside his apartment, where he would have remained undiscovered for some time. This was an uncharacteristically sociable gesture on his part.

A couple of days passed, and a few members of his family (a niece and her husband, I think) arrived to clean out his unit. They were nice people, quite friendly. They confessed that they weren't that close to the deceased. They were piling all this random stuff up in the hallway for disposal, and most of us offered to help them out. "Well," she said, "there isn't much to do. We aren't keeping any of this stuff. In fact, if any of you want any of it, go ahead and help yourself."

This was kinda awkward. Do you want the dead guy's stuff? All of us were, like, humminahummnina, right?

And then... well, you could see it coming across each of us: "I don't know... but... it would be a waste to throw away that brand new box of laundry detergent, wouldn't it?" "Actually, I do like some of his records he'd blare out of the window." "I could use another end table." Shortly, all of us were digging through it all with abandon. Why not?

I was painting a lot at the time. Mostly I was executing very labor-intensive reverse paintings on glass. In between, I enjoyed doing "quickies" by buying cheap novelty plaques at Pic-n-Save and thrift stores, altering them with googly eyes and minimal additions of paint, and calling it art. The trick was to see how little you could add to the plaque to totally warp its meaning and purpose (I posted an example here recently).

In the pile of the dead man's belongings, I spied a plaque featuring a photo of a goofy looking giraffe alongside the advice CAUTION make sure BRAIN is engaged before putting MOUTH in gear. Somehow, it was jolting to see such an inane sentiment present amongst such a morbid harvest, like a smiley face tattoo on a mutilated corpse. I had to have it.

Later, without barely even thinking, I whited out some of the lines in the plaque's message and filled it in to create the new, admittedly crass slogan shown in the finished work above, making it more directly commemorative of the circumstances which led to its birth, and also, I feel, reflecting our ambivalent feelings towards the guy in #2 and what he had done.

And that's the story of how I made that dumb, tasteless artwork.
Posted by Peteykins at Thursday, March 04, 2010

I am so glad you are blogging again Sparkle Pony

Good story, Peteykins. An insight into the artist.

Wow. What a story! The art seems to me to capture the ambivalence of the experience you describe very well.

"considerate that he did it in the hall..."
When I lived at the Gangplank Marina years ago an elderly man who lived on a houseboat shot himself (suicide.) As a consideration, he tied a rope to his ankle and set up the impact so he would fall overboard. When police arrived, he had left a note affixed to the rope stating "I am at the end of the rope" and he was.

Two things I'm taking away from this:

1) I will make it a point to tell any neighbors and/or roommates that, if I die, they are welcome to any of my things not otherwise set aside for relatives and not to feel bad about taking them; if it gives them joy and/or usefulness, my spirit will rest easier.

2) Be slightly impressed/bewildered that Peteykins left his apartment, albeit not the building, while it was surrounded by jumpy, armed men.

Now, I'm just asking, because it's been bothering me:

What was up in apartments 4 and 5?

The folks in #4 and #5 were unremarkable. I didn't know them well. I believe they took part in the ransacking, though. Basically, they would have cluttered up the story.

PSP - Just in case: you've got dibs on my stereo.