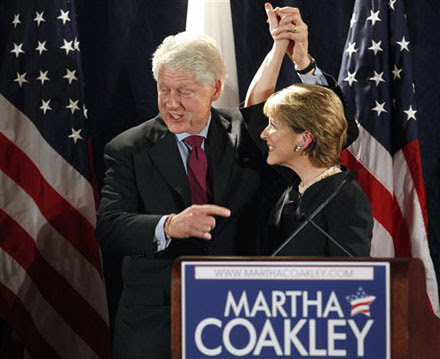 
Bill Clinton didn't actually pick up Martha Coakley and throw her into the crowd, but he did jab a mighty finger in her direction and hoist her arm into the air, just in case anybody wasn't getting the message.
Posted by Peteykins at Monday, January 18, 2010

Is he headed for the rack?

Bill looks like he got into the moonshine before he took the stage.
But at least he wears a wedding ring.

If Bill had tittytwistered her she would have won. He is after all the Magical Creepo.

A fat lot of good it did for Bill and Barack to show up and stump for her.
P'tooie!
She phoned it in.