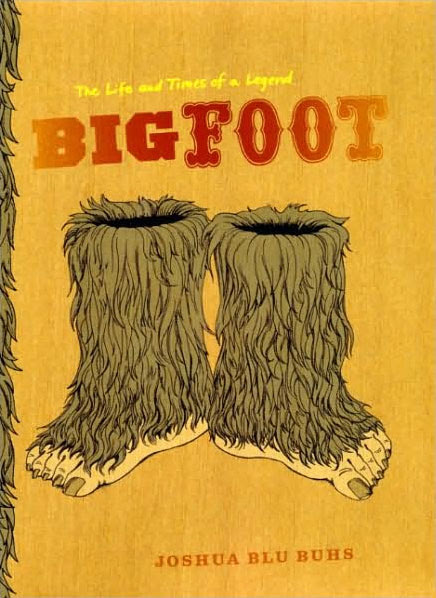 I sure am enjoying Joshua Blu Buhs*' fascinating take on the Bigfoot legend, just published by University of Chicago Press, and not just because –full disclosure!– I handled the contract for his use of an NGA artwork in it (Our image isn't online, but you can see a similar print here).

Buhs isn't interested in whether or not Bigfoot is "real," but rather in the legend as folklore, making it different from previous books on the subject. Folklorists ignored Bigfoot in the past because it was too "fake," too pop, too obviously pushed and created by mass media, newspapers, television, documentaries narrated by Leonard Nimoy, etc. Buhs, however, places the modern tales of pastoral man-apes within a rich matrix of legends of "wild men" going back in a more or less unbroken line for centuries in nearly every culture, from the hairy shield bearers in Martin Schongauer's 15th Century engravings to PT Barnum's "What is It." Buhs never condescends towards either the subject matter or those involved in propegating the legends, nor does he get cutesy. That said, it's a lively and fun read.

The author basically explains that if there were no Bigfoot, it would be necessary for man to invent him... and, well, duh.

I'm only about 1/3 of the way through Buh's engrossing book, but I can already heartily recommend it to readers looking for something off-kilter yet bursting with insight into man's awkward relationship with nature and his own primativism.

Also: if the designer of the jacket, highly untypical for an academic publication, doesn't win an award, the world is unjust.

I saw a movie (perhaps the Nimoy documentary?) in my local theatre as a kid, and they sold copies of the famous "Bigfoot turning back to look at the camera" photos. My kid sister bought one and taunted me with it for weeks; I refused to sleep in the same room with the photo.

This book does look fascinating. Thanks for the tip!

I'm intrigued by his name alone. How does one pronounce his last name? Rhymes with 'does'?

Hi. My name is Josh Buhs--the last name rhymes with fuse--and that's my book. Thanks for the kind words. I remember the NGA form: You wrote, "An inspired choice," IIRC. Also, thanks for liking my name so much. My mom'll be very happy.